The Beatoff Generation: Our Future Books Shall Bleed From Your Shelves Like A Hardback Elixir Reddened From An Embarrassment Of Grammatical Riches 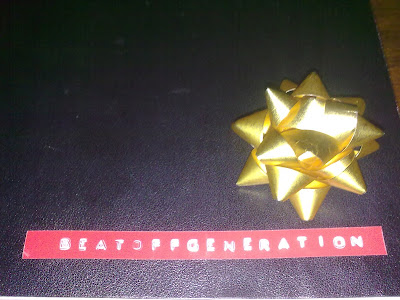 This is a manifesto.

2011 is the year of the Beatoff Generation, a collective of writers converging on the city of Manchester and yet looking past its bricks like herons scouting for prey beyond the tower blocks where the tower blocks are rivers and the herons are what I just said they are in the middle of this sentence.

Writing is our oxygen. Words are our blood cells. Pages are our imaginations and pens are, well, they're just pens, really. We are the sycophantic courtiers of narrative: our protagonists are our emperors and we bow down with short stories, nascent novels, cultural reviews, blog projects, stage readings and inane tweets.

Blackwell's in Manchester, Waterstone's on Deansgate, our future books shall bleed from your shelves like a hardback elixir reddened from an embarrassment of grammatical riches. Until then, all we can humbly offer is this manifesto for our future massive greatness.

All literary movements are over. Apart from this one, because this is the one we made up when sozzled in Common last night.

When numerous writers spilled out of the blog awards a month ago, some of us began writing for each other's websites, or at least upped the ante slightly. 330 Words doubled its number of scribblings, a few got stuck into Write In For Writing's Sake, while others bombarded Do A Barrel Roll then Screen150 with their Barry Normanisms. New friendships blosssomed. Collaborations abounded. Babies were made. Wait. Not that last one.

We laughed like insane, dribbling hyenas at thought of taking on such a self-referential and masturbatory label.

To mention names would be reductive, so there's no way I'll talk about Bad Language, B&N Magazine, Fell House, I Thought I Told You To Wait In The Car, Pantheon, Roy Keane's Lucky Scarf, Voices From The Below, Who The Fudge Is Benjamin Judge, Words & Fixtures, the many blog awarders, everyone I couldn't fit into one blog post - or the poor souls that simply humour us when we're coming up with stupid #beatoff ideas.

Maybe using "beatoff" as a hash or blog tag will help us coalesce, or give us that little nudge when wrestling with word counts, or maybe it'll become a magazine or a blog or a book to disgust those perturbed by its sordid name. Maybe it will become something massive, even though none of us are at all serious about any kind of a 'scene'.

Or maybe we truly are "forever doomed as the literary scene that gave itself the worst name ever".

When you next see Jupiter glowering beside the cheerful moon, think of it as the dot in the i of Beatoff Generation, the imaginary letters spanning the night sky like colossal typeface balloons. Climb onto your roof and sing to the letters, like a wordsmith wolf howling under the weight of literary history. And then hit 'publish' and see what happens.

Email ThisBlogThis!Share to TwitterShare to FacebookShare to Pinterest
Read more on: beatoff

It works everyone - and i tell you for why.

We, however, define ourselves by not being elitist. We are all-embracing. Our ethos is mutual encouragement, even beyond the fringes of Common. In fact even Common has the right idea, its name like some prophesy to future collaborative greatness.

My rabbit is called Delphi where there used to be an oracle who gave out uncannily accurate prophesies. It all fits in to the last detail!

And fundamentally, we are not wankers. We are idiots, perhaps, but talented idiots with good written word skills. Not wankers.

That should be our motto; Not Wankers.

We need an avatar for this. I shouldn't do it; I have no talent for such a thing.

I think the idea is top though; if only because it gives me more of an excuse to go drinking.

This is all rather marvellous. We are 'reclaiming' beatoff here.

Screen150 - Tell Delphi I'm sorry there were no rabbit metaphors in the above manifesto.

Tom - we have a logo, which is the thing at the bottom of the article. What's more important, however, is we need a dance move.

Benjamin - Marvel is the lifeblood that flows through our pens; our words spill with wonder into the consciousness of history. ... I have *got* to stop thinking like this. It's taking over my brain.

haha! Good luck to you!

My gosh, it really is a revolution, no longer will the term 'beatoff' have the same meaning.....or will it? Will they say of this generation "all they did was beatoff" or will they marvel at the revolutionary word play of them all? We wait to find out, but for now here is my commendation to you Mr Fats of the Roland good sir, keep beating off, greatness awaits you!
I thankyou!

I should point out I did not come up with the phrase. It was given to me 'pon a heavenly cloud that descended from the ether to a chorus of-- okay, it was made up by my mate Dave.

Wikipedia says on the Offbeat generation: "Young, untamed, good-looking and as influenced by punk rock as they are by Proust..."

Make that "not quite so young, mostly tamed, okayish looking, influenced by all sorts of weird music and certainly nothing they could possibly agree on as they are by Proust, the MEN and obscure blogs..." for the Beatoff generation.

So following this train of thought, this could be the last great hope of a generation, because quite frankly, that last one mentioned by Mr Fats, has scared the living s***t out of me! I will join this 'beatoff generation', I don't want to miss out on the good times, before the terror that is to follow! Here's to good times!

"Marvel is the lifeblood that flows through our pens"

I read that as "penis"

*gasps in horror* How dare you derive any innuendo from such a pure concept as, um, Beatoff. Oh wait...

You do realise I'm not going to be able to touch a pen for about a week now, right?

Man, I am wearing legwarmers. I have been wearing legwarmers all week. That surely without argument or the throwing of punches means I can take responsibility for choreographing a modern dance move to encompass the heightened emotional state of being part of the Beatoff Generation. Surely?

Well congratulations on your new movement, half of whose sites are Benjamin's pseudonyms! I'll come back when you know the difference between 'diverge' and 'converge'. Unless that was some subtle literary trope non-Beatoff scenesters are too dumb for…

Vole - I should make it clear that Benjamin is on his last warning with the movement. Apparently, he is every blogger mentioned in this post - including me - and it's all a plan to lure people into some kind of pyramid scheme.

Diverge / converge is a careless mistake and I have changed the text. I hope no-one convulges my divsummate unprofessionalism to the wider public.