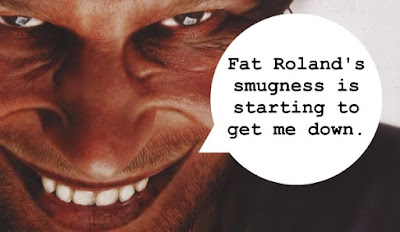 Aphex Twin is back at the Bloc festival, as revealed in an announcement today that takes a sideswipe at the internet gossip that has surrounded the appearance.

"This is the kind of lineup that jumps out of the undergrowth bites the back of your head off, like a tiger or something," says an email from Bloc sent out this morning.

It goes on to say, "You'll see a lot of idle speculation online, but check out the first round of showcase announcements to find out who's very much 'in' for Bloc's landmark fifth birthday."

The idle speculation, of course, was started by Bloc when they released an anonymous teaser video featuring the artist. The date they appended, "12 march 2011" fed right into the chatter about a new Aphex LP that's been rife on the internet for some time.

I showed the video on this blog a week ago and liberally slapped my greasy cynicism over any thoughts that it may be a date for a new album, saying "it's an advert for his appearance at the 2011 Bloc Weekender festival. CRASH! That's the rollercoaster falling off the tracks and landing on the candy floss stall."

I do sometimes us internetters would speculate as much about releases by the likes of, for example, Joy Orbison. I'm as guilty as anyone for making it all Aphex, Aphex, Aphex. In fact, screw Aphex Twin: I've changed my allegiance. If One Direction aren't playing Bloc 2011, I'm not coming.