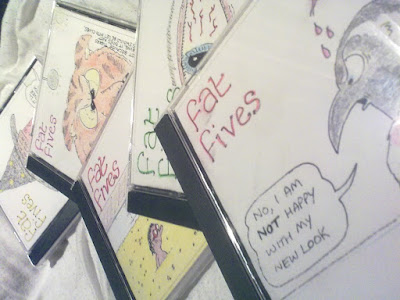 Twitter is like the entertaining uncle who gets his willy out and stamps on furry animals while old grandfather Facebook sits sullenly in the corner with his hoop 'n' stick and faded photos of a trip to Blackpool he took with MySpace back in the 1920s.

Which is why I ran a competition to win a compilation CD to celebrate my 5,000th tweet. The winners were Rob Gregg, Ani Smith, Lee Moore, Gareth Cutter and Ian Breen. They'll be getting an exciting handmade disc of some of my favourite choons, each sporting arty scribblings aimed directly at them (pictured above).

In other unconnected tweetery, I went pun mad yesterday. Because I've had the phrase "Selected Ambient Worms" in my head for months, I started tweeting some Aphex Animals. It caught on and it saw me 'trending' on Twitter alongside other hot Manchester Twitter topics as Emmerdale, MCFC and One Direction's Zayn Malik.

Here are the Aphex Animals (hashtag #aphexanimals) that my trusty followers and I came up with. If you know Aphex Twin's output, you'll get the idea pretty quickly. Thanks to everyone who dug into their punnery dungeons for this little lot:

- 26 Mixes For Cats
- 26 Mixes For Daschunds
- 54 Cymru Bees
- 54cymru Beast
- Acrid Avid Hamster Shred
- Alpaca (which is based on, I had to be reminded, a Tuss track. Not that The Tuss and Aphex Twin are in any way connected, of course. Not at all.)
- Analogue Puppybath
- Antalord
- Black Widow Licker
- Cock/Ver10 (which is less of a pun and more of, um, an actual track. A track, incidentally, which I accidentally played in a shop at the Lowry Retail Mall without remembering the rather fruity language halfway through.)
- Come On, You Slugs!
- Come On You Stags
- Come To Tabby
- Dodecaheron
- Dododecahedron
- Dolphium (the one of which I am secretly proudest)
- Duckqs
- Dukqs
- Fenix Skunk 5
- Gnu Calx
- Hangable Auto Bull
- Hart as you mean to go on
- I Bear Because You Do
- Kangaridoo
- Lamalord 10
- Laughable Butane Dog
- Mike and Ostrich
- Milklamb
- Monkey Rhubarb
- Moth
- Next Sheep With
- Polynomial Seahorse
- Prezambeetle
- Reunicorn 2
- Richard Bee James Album
- Selected Ambient Worms
- We Are The Gnu-Sic Makers
Edit: Some of these have been added later. See the comments.

All of this Timfoolery (which I have just made up and is a reference to Tim Vine) reminds me of the other time when I went pun mad on Twitter. In July last year, I realised that the whole of rock history boiled down to, well, a kettle of fish.

So I raved about Eels re-recording the Prodigy's Music For A Jellied Generation, and Professor Brian Carps playing keyboards on D:Bream's Things Can Only Get Battered.

My followers and I namechecked Fish from Marrillion, Stingray from The Police, Gill Scott-Watch-Out-For-That-Heron and Mackerel Jazz from the band Hakeless (the ones that had a hit with Cod Is A DJ). And then there were tunes like Future Trout of London's Papua New Guppy and Underworld's album Dubnobasswithmyheadman (which only works if you mispronounce 'bass').

We debated the merits of real non-punning tracks such as Scooter's How Much Is The Fish, Stump's fish-themed Buffalo, Mr Scruff's Fish and also Red Deer Club's The Sound Of Fish mixes.

At one point, I started shouting things like "Injected with a poissons! We don't need sprat any more", "Everybody in the plaice, let's go!" and "Salmon haddock go if you think you're shark enough." Someone warned that my followers might clam up. I ended up promising that "I shoal net post any more."

Email ThisBlogThis!Share to TwitterShare to FacebookShare to Pinterest
Read more on: aphex twin, teh internets

you forget my only one i was proud of: mike and ostrich (obviously because i got the hashtag wrong, but still).

Here are a few more:

Too good not to add in. I've edited accordingly!