Blood sugar synths felines: some almost-recent tracks worth your attention 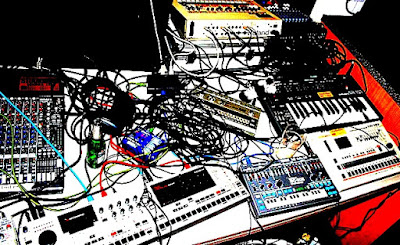 No, I'm not talking about the tongue-busting offspring of plants from the genus Capsicum, members of the nightshade family, Solanasomething-or-other. I'm talking about the wiley shirtless guitar plodders who appear to have gone afro pop.

Actually, I'm taking about John Frusciante, who dumped the Chilis in 2007 but has now turned up as one part of Speed Dealer Moms with legendary bass-driller Venetian Snares. This is a live experimental project consisting of those boys, Chris McDonald, a bunch of drum machines (gear, pictured) and, in the band's words, "many cats".

Their first release is the Speed Dealer Moms EP, a short and bitter chunk of tapping distracto-grooves recorded as-live in 2010 that will frighten Chili poppers but may sound somewhat familiar to Snares followers.

While I'm perusing recent tracks (mainly from the end of last year), I've been addicted to Rafferties's Rank Functions EP. The title track is a 2step tech stormer on his own Super label that turned my pants brown, but check those warm chords in His Counting House or the out-and-out house snap of Horse Flesh. Suddenly, I feel Raffertie has "arrived" in that really pretentious way some people say "arrived".

Meanwhile, The Black Dog's latest offering is Subject To Delays. That's not an announcement for tardiness, but rather the name of their latest EP in their Music For Real Airports project which features rolling house and drifting ambience in equal measure.