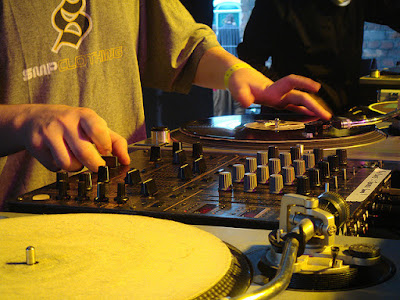 Speaking as the UK's leading proponent of the Chicago footwork dance style, I was delighted to see Bangs & Works come out recently on Planet Mu Records.

If you're not aware of the footwork phenomenon, it's halfway between a breakdance stand-off and an epileptic version of the riverdance. Planet Mu, that UK staple of electronic music, spent over a year tracking down footwork proponent DJ Nate in preparation for this album.

Bangs & Works Vol 1 is 25 tracks of bad-talkin' dubstep-influenced dirty Chicago dance music, none of the artists I've heard of, but which brings to mind the evolution of nu skool breaks by Adam Freeland and Burial's more sample-heavy moments.

By the way, I lied. I'm not the leading proponent of the Chicago footwork dance style. If I was, the result would be somewhat akin to the punchline to the old joke, "what do you get if you cross an elephant with a kangaroo".

Another compilation worth its smelling salts is Ghostly International's retrospective We'll Never Stop Living This Way: A Ghostly Primer featuring 11 years of works by artists that have since become bleepists du jour:, including Gold Panda (glitchy and fuzzy), Loscil (floaty and melodic), Matthew Dear (robotic and dark) and Dabrye (laidback and loose).

If you get the album, you also get a Ghostly Book, which inevitably will carry a photo taken in the 1840s of someone you saw at the Morrisson's cheese counter last Sunday. That's how ghostly books work. You see someone in the book and then you die or your hair turns white or Jack Nicholson gets all axey on you.

Meanwhile, Manchester's greatest fader-strokers have come together for Mind On Fire's debut album proper, Great Minds (aka Mind On Fire 005). The bringers of Fire have been promoting nights in God's great city for six years. although this album feels very much like an opening salvo in the war against bad music.

It includes Detroit-smooth beats from XXXY (featured by Fabric before now), G Kut's bhangra-wobble Dance Of The Cuttlefish and Neko Neko's inappropriately-named Fast which takes Plaid's trademark synth sound and smothers it with Boards Of Canada dreaminess. More of the same, please.

The photo above is G Kut at the DPercussion festival and is one of a number of excellent photos taken by Flickr user Rufus A. My favourites are these Durham arches, and eerie singer and this picture of a floating dog trying to fold itself up.

Email ThisBlogThis!Share to TwitterShare to FacebookShare to Pinterest
Read more on: 2010 album releases