Crimes Against Keyboards: the winner

Roll out the Bunty magazines and spank your carpets until they're dust-free. We have a winner, ladies and gentlemen.

Jon Mann has won the Crimes Against Keyboards competition. He bags himself Bleep.com's top 100 tracks of 2010, which probably means he'll need to build new shelves in his mp3 player to take all the extra weight.

Some fine people didn't win, including Compound Ear who used my logo and said really nice things about my blog and refers to his chosen dance music nemesis as an "aural holocaust". But I'm happy Jon won because I like his rant too. It will appear later today as guest post on Fat Roland On Electronica. 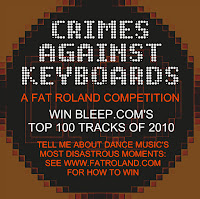 Jon, who describes himself as 29-years-old and an Aquarius (I'm *so* turning this blog into a dating site) says:


"Just really happy to be the lucky one who got selected for the prize. Just dropping it into itunes now :-)


"I've picked up a couple of these tracks over the course of the year but I'm really looking forward to hearing something good that passed me by in 2010."

Meanwhile, Bleep's top 100 is available on their site until February 10th. I know you can probably stream or steal a bunch of brilliant tunes from last year, but downloading this lot at 30 pence a track is a pretty impressive one-hit way of downloading the state of dance music today. Like Keanu downloading martial arts in Something's Gotta Give (editor's note: check this is the right film).

And no, I wasn't paid to say that. Long-time readers of this site know I'm a sucker MC for all things Warp-related.

Watch this space for Jon's winning entry and proof that people who, shock horror, don't have a blog can write blog posts too.

Email ThisBlogThis!Share to TwitterShare to FacebookShare to Pinterest
Read more on: crimes against keyboards

I would've written about SL2's On a Ragga Tip, but the mere mention of the name still makes me run screaming from the room.

I have no idea how that could possibly, in any way, be considered as anything other than the greatest single ever made. If the Beatles had still been around, they would have recorded On A Ragga Tip.

... but they did cover Smack My Bitch Up:

I'm contributing here way after the event, but, dammit, SL2's On a Ragga Tip was a good piece of music. Far better than some of the other bilge the rave scene generated at the time.

I seem to remember SL2 being "proper" rave. The S out of SL2 is still going strong: if you delve deep enough on his rather Web 1.0 website, you'll find a picture of Crazy Frog having a cigarette. Keeping it real! http://www.slipmatt.net/other_files/mainsite.html