Fat Roland Bangs On... as an Electronic columnist 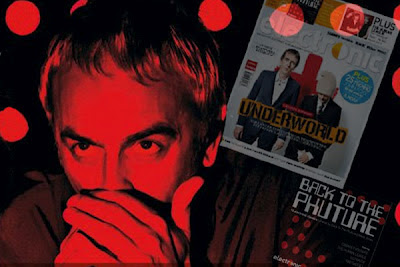 Music was invented in 1942 when Aphex Twin made didgeridoos out of energy and all the other musicians looked blank as they continued hitting rocks with sticks.

Since then, Yazz got to number one and therefore created an inherent song title irony at the highest position in the charts, Men At Work invented the Village People, and Leonard Cohen won the X Factor.

This is the kind of keen music knowledge that has won me a new gig: I am now a columnist.

'Columnist' sounds like a put-down for people who worship pillars, but for those people too modern to appreciate opinion pieces beyond Kim Kardashian telling Twitter that she's watching herself on telly, a columnist is someone who puts words in a publication for people to read. Like Melanie Phillips or Matthew Parris or Marjorie Proops or anyone with the initials MP.

The magazine twisted enough to publish my rants is the all-new Electronic, a publication for bleepy music fans by the kings of print Future Publishing. The first edition (buy it here) puts Underworld, Human League and the whole of Detroit techno under the spotlight... and it also has my column, called Fat Roland Bangs On.

I am so excited about this, I am dribbling from every orifice. I've bought Future publications for years - in fact, I'm tapping these very keys just yards from dozens of back issues of Future Music. Which may be handy for mopping if my excitement gets too much. Electronic is less techy: no dull gear reviews, just lots of passion about great bands.

What am I banging on about in my debut Bangs On? You'll have to buy the mag when it comes out on July 20. Like the Facebook page for more. Those with a keen eye may spot my trails of wordsludge elsewhere in the magazine... but I'll leave you to figure that out for yourself.

Here's to issue one of Electronic! Bleeps away!

Do a whole column in bleepy bloopy noises.

I'm starting with scat and working my way up. At the moment, I don't even write live: I just mime to DAT.