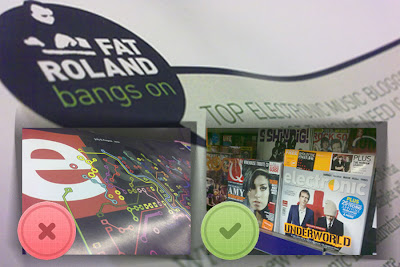 Electronic is out today. That means it's time to rattle the windows of WHSmith until they let you slither across their floor to drool on their magazines.

Please buy the magazine about circuitry. I feel awfully bad they've bought it in. Two copies and all. I would spend my money but the last time I connected a circuit board, Pluto downgraded from being a planet. If I tried again, the moon could become a pebble and all the werewolves will die.

Oh and you should buy Electronic mag too, I suppose. Heh. I was having a leaf through today and it's so refreshing to have a magazine that seems to be aimed at me and my bleepy world, from Kraftwerk to Carl Craig, from A Guy Called Gerald to Underworld. Other dance music magazines seem so caught up in club culture, they can be a bit like having Zane Lowe implants in your brain.

I mean, Electronic even has a general section called 'Scanner' which sent a slightly irrelevant frisson of Spore-related nostalgia up my spine tubes. Seriously, if your newsagent hasn't got this magazine in, ask them for it.

Last month an author. This week a columnist. Next week, I release an album. Tick, tick, tick - and only the occasional cross.