Five ways to survive the next five years of Tory government 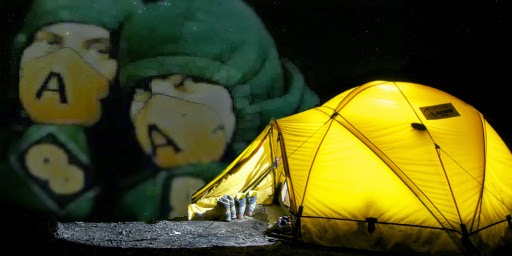 The Tories won the election and this can only be bad news for the vulnerable and the poor. Many people won't know what living under a Tory majority is like: the last time they won an election, Right Said Fred and Altern-8 were in the top ten.

It's okay though because I have sure-fire methods so we all survive the next five years.

It doesn't matter where you are - in your garden, in front of the toaster, in the shower - start digging. Make it a good and deep hole. Climb into the hole on regular occasions.

Make friends with the worms. The hole is your home.

Is it hot? Is it cold? It's both, but how can that be? Baked Alaska is the most demonic of all the desserts and its contradictions can never be understood. Make a Baked Alaska.

Then bury it in the hole for it must never be mentioned ever again.

Rant on social media about how awful the government is. Your followers in your part of the echo chamber will love you for this, because they agree with you and deserve to be castigated for that. Whatever you do, don't write letters or contact those in power.

Install broadband in your hole.

When the hospitals get sold off to casinos and every third child is converted into Tesco shares, you'll need a high profile and shocking strategy. Have several dozen extra arms grafted onto your body. Run down the street flapping your new limbs like an octopus on Free Scallop Tuesday.

Be careful not to fall down a hole. There will be a lot of holes by now.

5. Rent out your chin

Rent your chin to campers and caravanners. Offer cheap toilets and good drainage. Show them the view from your forehead. Tell them this is as good as anywhere on Anglesey, although the crazy golf is shut for the summer. When they ask you about your ill-advised goatee, change the subject. Perhaps suggest they move their tent into the hole. It has Baked Alaska in.

Mmm, Baked Alaska, they'll say as they lick their CamperGaz stove with longing in their eyes.

Many will suffer under this government. Ranting on social media will not be enough. Choose your campaigns, whether it's 38 Degrees or Liberty or Quaker Social Action. Whatever. But choose something and start small, for you will need your energy.

Be active, be kind, be focussed.

You didn't expect this to suddenly get serious, did you? I'm thinking through how I can become more socially active over the next five years: when I do this, my imagination throws out a load of junk. Hence the arm/chin nonsense above.

Sorry about that. There is no such thing as an octopus-human. And Baked Alaska is kind of disgusting.

We need to protest as much as we did back in the 1990s. You are not in a hole. You can stand tall, and you can speak to power. In the words of Right Said Fred, it's time to Activ-8.