An acid-tweaking return for 808 State 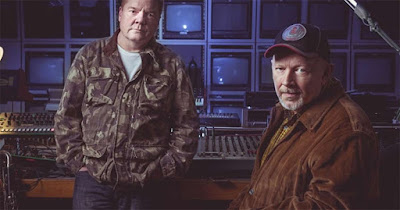 One of this summer’s bestest things is the return of 808 State.

You might know 808 State from that saxophone thing they did back in the olden days. They also helped define modern techno through the rise of Detroit house and the Hacienda. Wikipedia also says 808's Graham Massey was a member of the Barbie Girl Danish pop band Aqua, but I’m pretty sure they’re linking to the wrong Aqua there.

The band’s comeback album is Transmission Suite - their first for seventeen years. In the past, they’ve blurted out quite dense techno, but this new material feels looser. It’s acid-tweakin’ paranoid rave gubbins by grizzled Mancunians who get drug flashbacks when taking their Rennie’s. Sometimes old ravers slow down, but there’s plenty of improvisational energy in this new material.

They recorded it at the old Granada studios in Manchester, formerly home to TV broadcasts like Coronation Street, World In Action and, er, The Chase. The nicest thing is you can feel Manchester’s club history running through Transmission Suite like day-glo varicose veins: it’s giving me flashbacks of gigs at the Boardwalk and Sankeys Soap.

There's also a strong feeling of paranoia in their new work - very appropriate for our current times, I think. Have a nosey at their moody video for Tokyo Tokyo and you'll see what I mean.