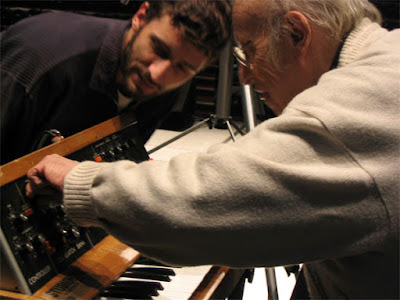 A four-day break in blogging? Pah. I may as well throw my computer into the sea.

I've been rather busy, though, with an unusual project for an electronic music writer. For the past 48 hours, I have been dipping a tentative toe into the whale-infested waters of Christian radio.

We play some cool (and some not-so-cool) music by Christians, from the likes of Sufjan Stevens, Demon Hunter and Richard Swift, and sometimes we smash things up with a hammer in the name of God. You can follow my exploits on the Theatre Of Noise website, where you will also find a link to the programme's Twitter page.

While you wait for normal service to resume, why not amuse yourself with an old favourite of mine. As I said in this post last week, acid funboy Luke Vibert (pictured with Jean Jacques Perry and a Moog) has tidied up his beats somewhat for the hip hop sounds of Rhythm.

Rhythm brings together a handful of EPs released on Japanese label Sound Of Speed. It's the sight of an electronic genuis very much not throwing the rattle out of his pram. The beats are straight and orderly. Like rhythmic lampposts.

"Is this important?" declares a very serious sounding robot on Sparky Is A Retard. No, not really. It won't go down as Vibert's best album: file this album next to those MoWax-type breaks compilations you used to collect when you were learning to scratch.

Or indeed, file it next to your favourite Wagon Christ discs... which might well go down on Christian radio, now I come to think of it.