Wevie Stonder: all the people are fridges; all the food is made of October 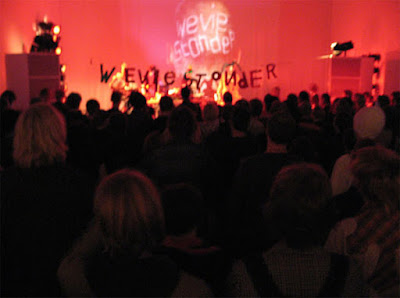 For a decade, ridiculous joketronica band Wevie Stonder (photo: Fjords) have been churning out their own parody dance music, featuring (according to the New York Times) "singing and shouting" and "a portly German tuba player in sunglasses and costume antennas."

They are electronica's version of Weird Al Yankovic, except without the yawning realisation that you've heard the joke before.

You'd think they'd be stuck in a rut doing this kind of thing, like Goldie Lookin' Chain. Yet the boys still have one sweaty ear pressed up against music's pregnant underbelly. Their latest album The Bucket churns out dubstep and grime references like some kind of clown-show sausage machine without an off-button.

Hans Peach takes off Leftfield and T-Rex and is the sound of all the guitars and all the synths playing Twister after closing time in all of the UK's instrument shops. Small People (think Lemon Jelly on K) is a Carribean island, palm tree at its centre, spinning in giddy circles like a warped record.

I have no idea what any of The Bucket means. It's like being at a party where the people are fridges and all the food is made of October. Wevie Stonder leave the quirkiness of Lemon Jelly and Avalanches dead in the dodo juice.

Cool! I really need to check out more from this group. Anything you might suggest?

Start at the beginning, I say. I have an ancient 12" knocking around somewhere, but I can't remember what it was called and I can't find any internet evidence that it ever existed! Start with first album Eat Your Own Ears. I like it - it makes Lemon Jelly sound like they're not really trying.