I sold my soul for the second time*: Oasis at Heaton Park 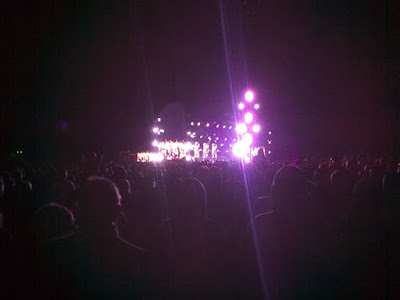 Y'alright our kid? Oasis were lush the other night. We well got bevvied, the burgers were well mank, but the boys brought the party on big style.

Crikes, matron, pass the vermouth, I seem to have come over all indie kid. But yes, I went to see Oasis on Thursday, courtesy of a couple of kind-hearted souls. We were some way away, as you can see from the piccie I took (above).

I'd sold my soul to Oasis before* - I was at Maine Road in 1996, when they simply entranced. But now I am older, less wise and probably a lot more cynical.

So I survived this lager-sodden football-chanting ordeal by wearing a pair of white trainers. They helped me fit in perfectly, and I always had the option of clicking the heels three times if I needed a quick getaway.

In the end, it was an incredibly good-natured affair. After waiting in the cold without sound or lights for 15 hours, one of the Gallagher boys promised to refund everyone's tickets, and the excited buzz that rippled through the crowd never quite left.

In fact, it wasn't an ordeal at all. The crowd camaraderie was infectious, and I think Oasis top U2 in that whole stadium rock spectacle thing.

So Supersonic soared like the anthem it's always been. Masterplan had pilled-up Ben Sherman lads hugging each other like they'd just come off a football field. And the band is turning out some pretty decent new songs as well (Waiting For The Rapture, which has the same beat as The Doors' Five To One, and Falling Down, which has almost the same beat as the fab four's Tomorrow Never Knows). (Get the set list here.)

Kasabian were moody and powerful, as I expected, and thank goodness I arrived too late for the other supports. Twisted Wheel are dull, and I made my views crystal clear about Reverend And The Makers in this piece here.

So, Oasis, I salute you. You were the best rock band in the world when Definitely Maybe came out, and 15 years later, you were compelling and funny. You just need a Moog solo in every track, that's all.

*a reference to the opening line of The Importance Of Being Idle. And no, I didn't quite sell my soul: I got free tickets on both occasions. I gave my soul away gratis.

Email ThisBlogThis!Share to TwitterShare to FacebookShare to Pinterest
Read more on: beatles, gigging, kasabian, oasis, reverend and the makers, the doors, twisted wheel, u2

Nice! I saw Oasis when they toured their "Standing On the Shoulders..." lp around the states. It was at a small, beautiful theater-style performing arts venue (abt 3,000 person capacity)in Akron, Ohio. I was blown away at how good they were live. My brother still follows them, but after hearing some of their releases after "Standing", I lost my interest in the band. Might have to give their new stuff a listen.

I still only really like their first album. Which makes me sound like a music purist, but it's true.

Understandable - that was the "true" line-up, but they were such dicks to the first drummer. All the line-up changes made me leary of the band, but at least the Noel and Liam stuck around (mostly), and I think one of the guitarists from Ride has been with 'em a while now.