Trouser-goosing Snares, menacing woodwinds and dribbling my tongue at Björk 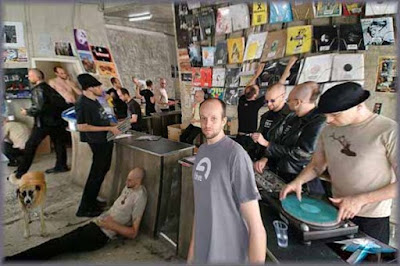 Venetian Snares has turned in a brand new EP, Horsey Noises, to go alongside recent splooj-guzzling album Filth (which I writted about here).

The eponymous title track sets some commercial vocals (asking a horsey girl to make horsey noises) against loose drumming and a trouser-goosing bassline. Just when you think he's cantering through some abstract DJ Food-isms, he cracks it up to full-on rave. Aphex Twin tried vocals when he sang about milkmen in the mid-90s, and this is exactly the same wrong side of deranged.

Meanwhile, music technology geek Monolake (pictured) has taken time out from designing midi controllers (no, please, don't click away) to produce his first new material since the 2006 album Polygon Cities.

His new single is called Atlas / Titan, and the two dub-inspired techno tracks are as massive as they sound. The bass on Atlas bangs its fists angrily before the woodwind - yes, woodwind - adds a whole new level of growling menace. It's Autechre in a bloody bad mood. Flip-side Titan is as joyfully dark, but a little duller.

Finally, Icelandic princess Björk has offered us many treats on her new album Voltaic.

She has filmed her tour promoting her last album Volta, where her vocals soared above the abstract atmospherics of LFO's Mark Bell, but she's decided that's not enough.  She has also rammed in about 92,000 other discs, including Volta music videos, a one-take live set recorded before Glastonbury 2007, and a swathe of remixes from the likes of Simian Mobile Disco and Matthew Herbert.

It's probably the most comprehensive album and DVD package ever to exist. Well, okay, it's probably not. But you should buy it because you're in tongue-dribbling awe of Björk's ability to be both a superstar and relentlessly uncompromising.