This is part four. Please do read the other parts of this blog post: part one, part two and part three.
To read last year's top ten best electronica albums, click here. 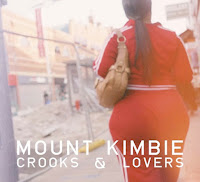 1 - Mount Kimbie – Crooks And Lovers
Mount Kimbie have been a fundamental element of the journey of dubstep over the past few years, but while the purists were polishing their wobbly basslines and pressing thinly sliced beats, MK were busy widdling in the sink and toking on any old influence they could find.

2009's Maybes EP was their first big airhorn in the face of the music industry, all taut summer guitars, plunging beats and r'n'b vocals. The duo dipped from some people's attentions when their second EP Sketch On Glass was released, but by then they were shining lights in a scene that encompassed the likes of Martyn, Burial, Joy Orbison and Bibio.

And so it came to pass that Crooks And Lovers was one of the most anticipated albums of 2010, and I really don't think anyone quite knew what to expect. They were hailed as post-dubstep and their music spouted the language of ambience, house, glitch, post-rock, techno and hip hop.

The album opens with a gliding guitar mantra that quickly descends into the first real rhythm hit of Would Know, its slow wooden beats underpinning epic filter drops that spin your brain 720 degrees. A discordant three-chord theme adds sadness to a Hudson Mohawke-like jam for Before I Move Off, then we're moved into acid techno and minimal click-house territory - but not without being licked in the face by the fret-scraping guitar melancholia of Adriatic in the middle of it all.

Ode To Bear could be a Flying Lotus track, but before you start mentally noting comparisons, you're blasted by Field's proper rock guitar (played rather badly, it has to be said). Mayor is some kind of manic toytown rave stripped down to the barest of beats - then before you know it, it's over. Mount Kimbie have pissed in your post-dubstep sink and they're halfway down the road, their pockets bulging with most of the contents of your booze cupboard.

To understand why Mount Kimbie is my number one electronica album of 2010, you need a smidgen of context. For years now, I've been banging on about Warp Records this and Warp Records that, harking back to a time when phrases like "IDM" and "warehouse techno" meant something.

Meanwhile, the music scene changed around me. Some crusty danceheads got guitars out or started moving Beyonce to the front of their record collection, and the electronic world became a lot more eclectic. Someone somewhere invented "folktronica". This new freedom allowed the likes of Bibio to get away with pastoral, emotive real instruments disguised as proper techno, or the likes of Burial to wedge proper MOBO vocal slices into his work.

I fought against it. If I saw a guitarist, I would regularly break his or her fingers. If I heard an album with vocals, I'd chuck it in my Hasbro woodchipper. But then Clark (last year's best album) started using vocals, as did Bullion. Matthew Dear made guitars, like, totally lake superior, as did Battles. Crikes. Then there was the moment when Mount Kimbie's Maybes came out and the penny in my brain dropped with a pleasant clang.

The Mount Kimbie sound, all those clanks and thuds and strums you can hear on Crooks And Lovers, went on to define much of this year. With that album, Hotflush Recordings hit the stratosphere, already rocket-powered from the likes of Search And Destroy, Untold and Joy Orbison.

And most crucially of all, it laid the eggs that would hatch two words that look set to define 2011:

Blakey's CMYK is undoubtedly the tune of 2010: its flurry of mixed up vocals ("found her... red coat"), fast-step garage and bubbling atmospherics sounded like it either came from deep within the earth or from another galaxy altogether. What's annoying about James Blake is his failure to produce an album this year (it may well have featured in my top ten), but the anticipation of that record (February 2011!) has set musos, journos and fashionistas equally ablaze with excrement-- I mean, excitement.

James Blake would not exist without Mount Kimbie. Well. I don't mean literally. Kai and Dom from Mount Kimbie didn't give birth to James. Well... they may have done, but it's not mentioned on discogs.com. If you're reading, boys, you may want to clear this one up in the comments section.

And so, there we have Mount Kimbie's place in history, their moment defined, their ouvre, um, ouved. It's a sound that has weedled its way into the eardrums and quietly nags at 2011 to come up with something better. MK's rise to success has been rapid: two EPs and suddenly they're my album of the year - which, may I remind you, is much more vital and era-defining than any Mercury, Grammy or swimming certificate.

Thank you for joining me for my top ten albums of 2010. Buy Mount Kimbie's Crooks And Lovers from Bleep or Boomkat or Piccadilly and stay chooned for my round-up of this year's best films, and then my spectacular uber-preview of 2011, which I will slam onto this blog just as that Auld Lang Syne hangover's kicking in.

This is part four. Please do read the other parts of this blog post: part one, part two and part three.
To read last year's top ten best electronica albums, click here.

Love the list. Toytown rave should be the name of an album. Or a rave, at least. As for the James Blake/Mt Kimbie parenting controversy, it'll be all over the redtops in no time. *the truth will out*

Mark my words: people will have forgotten about Nick Clegg by the time Kimbiegate's over.