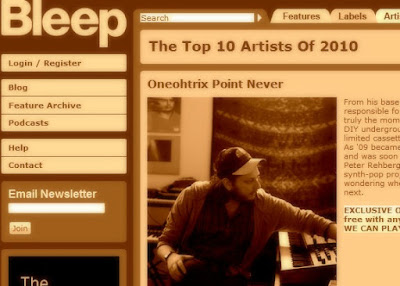 Online retailer Bleep.com has hit December running with a series of top tens of 2010.

The other day, they posted their top artists of the year, which included Oneohtrix Point Never, James Blake, Roska and Caribou. In Oneohtrix, otherwise known as Brooklyn's Daniel Lopatin, they saw a "prodigal, prolific exponent of the synthesiser."

And if your order his album Returnal from Bleep, or his other records, you get his exlusive mix CD Objects In Mirrors.

Yesterday, Bleep.com revealed their top ten labels of the year. Their record label of 2010 is Numbers, a Glasgow outfit whose mission to "melt together the seemingly disparate sounds of R&B, techno, electro, house, dubstep, UKF and 80s funk under one glorious groove" was lauded by Bleep. The imprint's output this year included Deadboy, Untold and SBTRKT.

Because they're well chuffed and that with such high praise, Numbers have launched a compilation featuring every bit out output on their label along with a couple of new t-shirt designs.

Over the next few days, expect more 2010 from Bleep in the form of best albums, favourite EPs and most recommended reissues and compilations. I'll try and match them when I do my usual end-of-year round-ups later this month.

Meanwhile in another corner of the internet, Radio Scot Void has released some older tracks for free in a special mixtape that's worth getting simply for Shlohmo's Socks. The track, not the underwear item.