#KraftwerkBS fringe diary 3: losing myself in the show 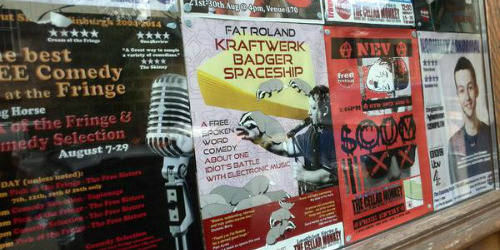 Two Edinburgh shows done. A dozen to go. If you've seen me perform, please do leave a review on the Edinburgh Fringe page for Kraftwerk Badger Spaceship, or perhaps pop a review on Twitter using the hashtag #KraftwerkBS.

I've spent the first few days either losing myself in re-writes or losing myself literally on the streets of Edinburgh. But this morning, I booked a bunch of shows to go to. I did two and half hours of flyering yesterday, with another two hours later today, but I don't my Fringe experience to be all promo and no audiencing. That'd be stupid. People who have seen the show won't be surprised to know I have tickets for, among others, Sam Simmons and Stewart Lee.

Audience numbers picked up last night. It's a lovely venue space at the Argyle Bar's Cellar Monkey - just on the south side of The Meadows. I'm so hoping word of mouth gets around, because I've been crap at proper publicity and promo. Too busy writing the flipping show.

On the positive side, I've fashioned a crappy card-and-pen sandwich board with some audience quotes on. It also carries a Twitter quote from Broadway Baby: "This looks way to interesting to ignore." Sometimes that makes people ignore me more out of spite and/or fear at the weird man dressed in cheap stationery items.