#KraftwerkBS fringe diary 4: the start of an ending (poetic that, innit) 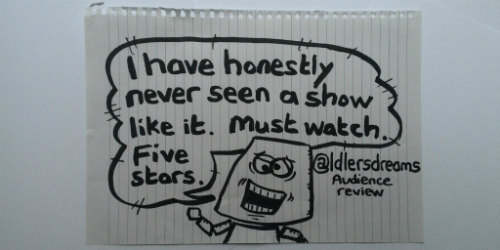 I did something drastic. I rewrote the show's ending. Today's audience was the guinea pig and it worked beautifully. The new finish lands the show with a nice clunk, a bit like a hippo dropping into a wheelie bin. I'm more pleased than a buffalo in a model aircraft shop. The audience responded like a newt riding a toboggan. Basically, something-something animal in something-something humans use.

I went to see Sam Simmons' wondeful Spaghetti For Breakfast. Sam's one of those people who's trying to bring something unique to his shows, someone who's blazing a trail of creativity through a dying forest of 't-shirt-and-jeans' stand-up comedians. Not that you should set fire to trees. Sam saw me at a bus stop after the show, thanked me for coming and shook my hand. We embraced, pressed our cheeks together and both rasped in unison, "let's petrol-bomb a larch." Okay, that last sentence didn't happen, but the point is he's a nice bloke and what he's doing is weirdly important.

One chap to whom I handed a flyer told me he owned a Moog. "Robert Moog gets a mention in my show," I said. He seemed happy with that information. I also met a cartoonist for the Beano. Two dogs have asked for flyers. Someone told me to laminate my sandwich-board: I presume that was local speak for something. Tell you what: flyering's a trek but it works. I reckon it's adding a third onto my modest audience figures. Can't complain.

Do make noise about the show if you can, chums. I'm a third of the way through. It would be great to get standing-room-only: I think that's achievable - but my audience is the only publicity machine I have. Kraftwerk Badger Spaceship is 5pm every day here until August 19th. If you tweet, use the tag #KraftwerkBS: I may even make a cartoon from your tweet (see above). Clunk!

I would like to see a picture of you wearing the sandwich board please.