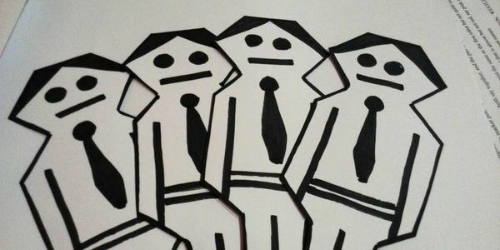 I got a review. I got a flipping review.

After only ever performing a one hour show a handful of times in my life, a reviewer sat in my audience and scribbled this for Broadway Baby: "Badger Spaceship is a seriously excellent piece of music-based comedy, and is a delight to sit through." It reads like there's a star missing, and the reviewer says "inane" a lot, but consider this:

> The show starts with a dry reading off a page to test the audience's literary mettle and, it has to be said, stamina. I am fascinated with audience alienation as a comedy tool. What I do is not 'easy' comedy.

> I'm ridiculously inexperienced at this type of performance, and I'm being judged against comedians that have worked their material over hundreds of times.

> The show is in a deep level of flux. I'm tweaking Kraftwerk Badger Spaceship every day. Some new bits work, some new bits don't so they get chopped, but the new ending is landing the show beautifully.

So am I proper chuffed with that review? You betcha.

I'm now into the second half of the run. Today is my birthday show. So it's time to increase the risks. I've switched out a weaker element of the show, which will shift the whole structure, and instead I've added these little chaps (pictured above). Already grasping for that extra star...

I feel like I'm living on the streets, despite being put up by generous hosts north of the city centre. I'm still staggering around Edinburgh in my homemade sandwich-board. I'm slowly toasting in the sun. My trainers have fallen apart. Yesterday, I paid £6 for a microwaved quiche: apparently "some rocket" constitutes a salad these days. If only I was a normal stand-up comedian: I'd totally mine that for content. It'd be cheaper to buy a real rocket! Amiright? Whatever, shut up. I've got a REVIEW.