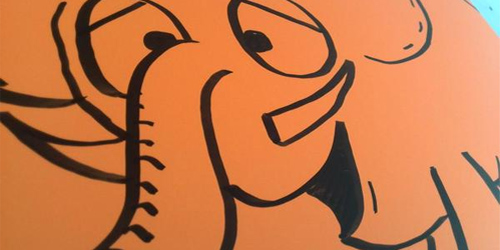 I haven’t blogged for a few days because I made a point about going to see more shows. My last few Kraftwerk Badger Spaceships went well, and now I am at home in Manchester. My Fringe is over. No more performing. No more attending. No more flyering. Just a big, gassy bag of nothing.

> I wanted to put on 14 shows, stay healthy, and enjoy the experience. Achievement unlocked. My average audience was something like 14 people, which ain’t bad for an unknown. I saw big names getting just 5 more than me. Nearly 200 people chose to see my debut Fringe show above a squillion other possibilities. Lawks.

> Early in the run, I was editing for two hours a day. Then it was one hour, then it was single sentences, and then I had a lovely moment a few days ago when all I had to edit between shows was one word (from “horse” to “stallion” if you must know). This means those that saw KBS later in the month saw a better show. Sorry 'bout that.

> Throw in a couple of low audiences or a walk-out from a famous comedian, and the isolation of an Edinburgh show really hits you. Enthusiastic audience feedback tempered this, and two lovely hosts in the north of the city kept me grounded. And yes, the city itself is such an eye-hugger, it has a way of architecturing your spirits back to health.

> I’m being judged against stand-ups who do this most days of their life. So throw in a run of high audiences and the knowledge that I’m hitting all my performance marks, and there is no better feeling. I’ll always remember the beaming or bemused faces in front of me, or that one person in every show who Does Not Get It, thereby proving my artistic worth.

> I was so limited. Hundreds of flyers remained un-flyered, I was slow to put up posters, I didn’t chase press interest as much as I should have done, and I barely did any guest appearances. But if I’d spent more time on that, the show itself would have been worse. Next year’s to-do list has already started.

> I’ve still so much to learn. I think I will look back on this debut show as a rickety, loveable tin-pot contraption that worked perfectly well thank you very much. What an experience. Achievement massively unlocked.

Huge thanks to the Edinburgh Fringe, Laughing Horse and the Argyle Bar for giving me a stage.