#KraftwerkBS fringe diary 6: like a room without a roof 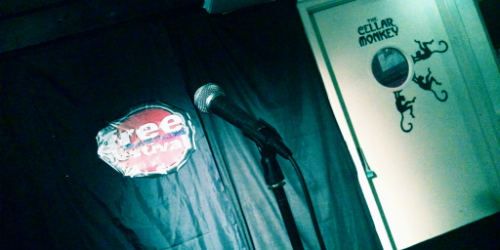 Flyering on the Royal Mile. In the rain. Oh my.

I was really miserable yesterday. I'm handing out flyers for two hours a day every day. When it's sunny on the Meadows, it's kind of fine. But the clouds spat their contempt when the heavens opened as I was flyering on the Royal Mile on Friday afternoon.

To make it worse, an jolly acapella group next to me blasted out the insipid plop of wedding-reception vomit that is Pharrell Williams' Happy. I cursed my life and I moved further down the Royal Mile for some peace and quiet. And lo and behold, God placed next to me another acapella group. And guess what they were singing. Yeah, you guessed it. In Edinburgh, you are never more than six feet away from the dried, brittle shell of Pharrell Williams' credibility.

I have five more Kraftwerk Badger Spaceships left before I skateboard back to Manchester. Rather than winding down, it feels the show is gaining momentum. Not necessarily in numbers (they're keeping quite healthy considering how weird the show is, and the audiences seem delighted), but creatively I'm treading new paths. Paths with increased momentum. On my skateboard. Basically, what I'm saying is I'm gaining momentum by treading a path on a skateboard. I'm confused. What was I saying again?