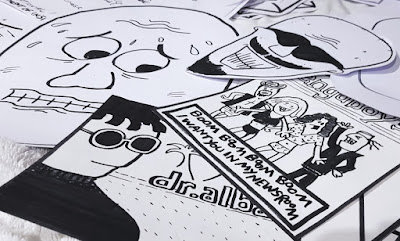 As the barman passes me, he says "they're queuing up outside!"

"Oh cool," I nonchalantly reply as my ego does backflips inside my brain.

My second outing for Seven Inch got a decent-sized crowd, and it already feels like the show is bedding in nicely. I've made some tweaks here and there, and I've replaced one section of the script with dog noises. No, really.

I'm choosing to do the show off-mic, as in I'm projecting like an actor, which is a weird experience in a Fringe space. This was initially prompted by the mics being knackered, but actually it helps me roam the space better.

Seven Inch has between 200 and 230 cartoon props (pictured), depending on how you define a 'prop'. It takes me at least two hours to rebuild the set every day. Speaking of which... Must stop writing coz I've got some cartoons to organise.

Email ThisBlogThis!Share to TwitterShare to FacebookShare to Pinterest
Read more on: seven inch