Cassette tapes are back, which is why I've got my sausage out 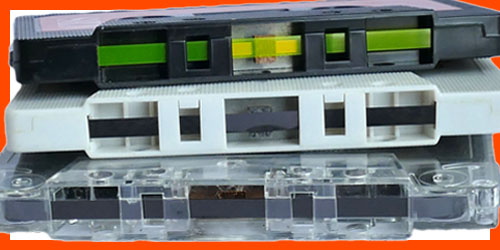 You remember cassette tapes, don't you? They were like mini reel-to-reel players. You could spool them with a pencil or a finger or a sausage.

You'd have thought cassettes would have been confined to the dustbin of history, like the black death, Vikings and knocker-uppers. Not so. We appear to be in the midst of a cassette resurgence. Sales are up a billion squillion percent or something.

Big stars are pushing the revival, with the likes of Kylie Minogue and Justin Bieber going down the cassette route. It's a good way to get someone to listen to an album in its track-listed order, escaping the ubiquitous shuffle button.

In fact, we're several years into a cassette sales boom. Kylie kicked things off in 2017 with her album Golden, which apparently included some annoying glitter. Just imagine it: the case pings open and your eyes get confettied to shreds. Way to add an unpleasant surprise, Kyles. Why don't you bake cakes with tigers in while you're at it. Cake tigers. Terrifying.

The increases in tape sales are massive, but that's starting from infinitesimal numbers. 2019's cassette sales are still only a tenth of one percent of sales 30 years ago. Even this blog has had more views than the UK's annual tape sales. Anything can show huge growth when starting from a low base. I could show a 100% increase in noses, which sounds humongous, but that's only one extra nose.

"Meh. Last week he had an extra shoe. It's getting boring now."

See? Not impressive. Still, seeing cassettes surviving fills me with a warm nostalgia all down my pants. My early music listening was from home taping, and the first dance album I became truly obsessed with (The Orb's Adventures Beyond the Ultraworld) I bought on cassette with my own money and hammered to death on my clunky old Walkman.

It's a surprisingly robust format. It was meant to be replaced by DAT, but that mostly stayed in the confines of professional studios. Big and small versions were made, with the small versions ending up in answermachines and dictaphones, but again the original format clung on. I've tried replacing my cassette-playing by having a band of giraffes herded into my living room to play cover versions of my favourite songs, but the cake tigers ripped them to shreds. Stupid Kylie.

"Cassette tapes" may be an anagram of "tastes cat's pee", but I'm happy I've got use of my pencils again. And my sausages. Welcome back, cassette tapes.

Further Fats: Daphne Oram changes the future with a bit of tape (2015)