In praise of 808 State's Gorgeous (which is gorgeous) 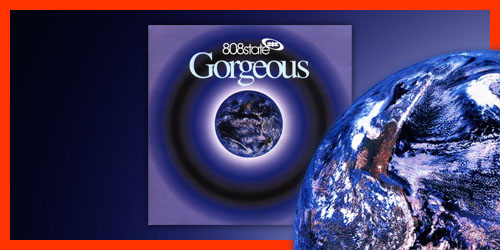 Here is a theory.

If a band calls their album Gorgeous, then everyone thinks it's gorgeous. Witness the scrabble at the record shop counter as dribbling music fans demand to feast on something gorgeous. "Look at this gorgeous album!" you scream at the haggard shop assistant. "It's called Gorgeous!"

Here is how that plays out in practice.

808 State calls their album Gorgeous. People are kinda fine with it, but are still wedded to previous album ex:el. Meanwhile, album tracks Sexy Synthesiser and the UB40-sampling One In Ten sound odd in the long-receding wake of novelty chart rave. Select magazine calls Gorgeous "over-familiar" and gives it three stars.

I have to say, though: Gorgeous was MY album. It came out in 1993, a year in which I was absorbing all the techno like a big shape-throwing sponge. It was my musical 'coming of age' year. Synthesisers WERE sexy. Calling something gorgeous DID make it gorgeous. I even wore the album's t-shirt to ribbons.

There is so much to commend about this album. The sun-soaked steel drums of Plan 9. The deep forest samba of Contrique. The hippy indie vocals on Europa being the most 1990s thing ever. The Loop Guru-style stomp of Southern Cross. And Colony being an out-and-out banger.

Following up 1991's ex:el was tough. That album had Bjork and New Order's Bernard Sumner. While Ian MacCulloch's vocals on Gorgeous's Moses had a Sumner-esque waver to them, serving to remind you of the previous album, Moses was much more of an earworm than any vocal on ex:el.

On ex:el, In Yer Face and Cubik landed with such a thump in the charts, their reverberations were felt for years. Gorgeous was softer somehow, more mature, and there was nothing that would obviously trouble the top ten. This was nice because it felt like my secret underground album: an eccentric collection of post-Balearic bangers (new)built especially for my CD player.

Gorgeous is great, and I have an affection for this album that's probably tied into my 1993 musical awakening. But I reckon I'm right. It's underrated. It might not have sultry lift music or James Dean Bradfield, but it's full of phat sounds. With a ph. And when people talk about pH scales, they're talking about science. Gorgeous is scientifically great.

I demand we reassess this album's status in the pantheon of techno history. Go up to that record counter. Feast on something gorgeous. Dribble all over the "card machine broken" signs and flyers for student club nights. Make sure the shop assistant knows you're serious. "I want gorgeous," you chant. "I want gorgeous. I WANT GORGEOUS." Recite this blog post as security bundle you onto the pavement outside.

You want Gorgeous. Say it. SAY IT.