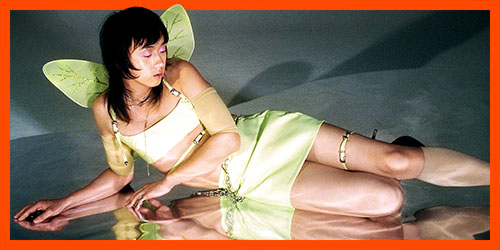 Here are five different flavours of album due for release in September. Think of this as an ice-cream cone stacked with five scoops. Better gobble it down quickly before your hand becomes a drippy mess.

There's a line on Marie Davidson's album Working Class Woman which goes “I want to smell you, even from far away”. On her new single Renegade Breakdown, she's in no mood for sniffing: "I feel disgraceful whenever you're around." Her new band, called Marie Davidson & L'Œil Nu, is quite the change in direction, with DIY pop influenced by Fleetwood Mac and Kraftwerk. Have a nosy at the album, also called Renegade Breakdown, here.

Berlin-based RUI HO (pictured) mixes Western dance music with Chinese melodies, and has built a reputation as a DJ and purveyor of futuristic sound collages. Her debut album Lov3 & L1ght takes a typically leftfield move into glittery EDM-tinged autotuned pop. Not for everyone, but the production is really on fleek, as the cool kids say.

Tricky seems to be back on form for the first time since, well, Victorian times or something. Fall To Pieces is his 14th studio album: that's as many albums as the Prodigy and Oasis combined. He's got a great new(ish) vocalist called Marta and it's got some pretty mournful vibes.

Field Lines Cartographer took inspiration from an elusive island for The Spectral Isle – it's full of UFOs or ghosts or Westlife fans (I might be wrong about that last one). If you want big fat soundscapes to make your ears tingle, then this is the album for you. The vinyl is 'seafoam' which means you can play it with a fish.

And finally, a quirky 1990s album is getting a fresh rerelease. Help was a hastily-assembled War Child charity compilation and featured tracks from Blur, Orbital, Portishead and Massive Attack. It had early OK Computer material, the first post-Richie Manics appearance, and a bizarre return by the long-deleted KLF under the pseudonym The One World Orchestra featuring The Massed Pipes and Drums of the Children's Free Revolutionary Volunteer Guards. The album's available to stream again in all its quirky glory.
Further Fats: My greatest idea once more crumbles to dust like a great big crumbly bit of dust (2010)