A Full On Guide to Full On: Havana's Shift and Ramirez's Hablando 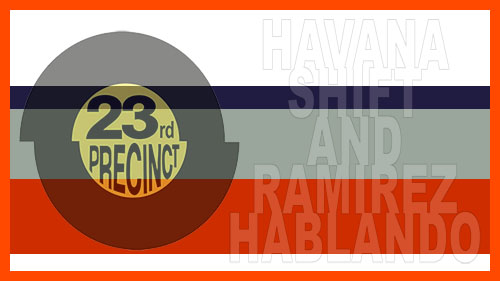 The second track on the album is Havana's Shift. I can't find a stream of the particular remix, but here is a version.

Slightly tribal progressive house, setting the tone for the Full On album.

Shift was released on Limbo Records, a label that arose around Glasgow record shop 23rd Precinct, a place frequented by the legendary and uber-cool Slam DJs.

You've heard of Slam: they're responsible for the Slam tent mentioned by Limmy here.

So yes, Glasgow is a very clubby city. I once hung around in Glasgow kebab shop after a club kicked out at 4am: these folks know how to party.

Limbo Records once held an online poll between Shift and Havana's other big track Schtoom. The latter won with 69% of the vote. It's like Brexit all over again, although with totally different voting numbers and no direct comparison to be made so please ignore this paragraph.

Let's move along. Havana, who sometimes spelled their name with a double N, was followed by Italian-Columbian house act Ramirez and a track called Hablando (it means 'talking' or thereabouts).

Ramirez was a project of the DFC (Dance Floor Corporation), another pioneering underground label that was an advocate in Italy for house music before any Italians were bothered about house music.

The imprint was the dance offshoot of Expanded Records, who'd struggled to sell new wave and punk records. They got into dance music in the late 1980s because their Bologna heritage. Label boss Giovanni Natale told Billboard in 1994:

"We got into the dance field, and it works because traditional Italian melody is ripe to be recycled into Euro-dance riffs."

I wonder if this is what is going on with the accordion line in Hablando. Have a listen. Again, I don't think this the exact same version that's on the album: let's just assume a whole bunch of the Full On tracks aren't available online, and we'll have to settle with different mixes.

We're three tracks in and we're already feeling the full Italian flavour of this Euro disco, via the underground Scottish club scene. Which is why we're about to take a detour to, er, Wilmslow Road in Manchester. What? Stay tuned for the next instalment of my peek into Full On – Edition One.

Email ThisBlogThis!Share to TwitterShare to FacebookShare to Pinterest
Read more on: full on guide to full on, havana, ramirez, slam