A Full On Guide to Full On: Megatonk's Belgium and Frendzy's Can't Stop (these are real tracks, honest) 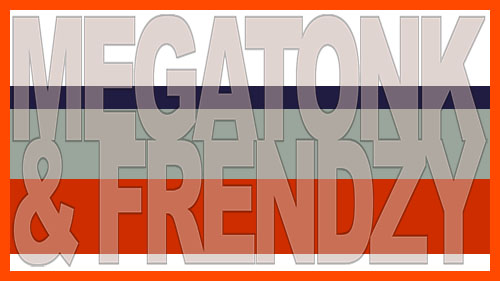 I've been blogging my way through the 1990s house music compilation Full On: Edition One. But then I stopped for a bit. I had to take a break.
I've been living a slightly isolated life during the whole coronavirus thing. No partner to say good morning to, no elderly relatives to mouth greetings at through a window, and no Fat Roland clones in my basement lab, not since they escaped. I can spend days locked in my own head.
Which means my mental health ebbs and flows, like the tide of an ocean, only with less seaweed. Sometimes I need to step away from things to allow myself to be a bit mentally quieter. Hence not blogging for two weeks.
Let's get back to the 1992 Deconstruction compilation, which most of you won't remember, but which all of you can look up on Discogs.
Megatonk's Belgium is a perky house track with sampled diva vocals that were the staple of Moby tracks back in the 1990s. Have a listen here.
Megatonk was one of the many aliases of Charles Webster, a remixer and label owner who once engineered for the likes of Juan Atkins and Kevin Saunderson.
There's not a huge amount to say about Belgium. The track appeared in a mix by Sasha at the Universe club back in 1992, blended in with Lil Louis's Club Lonely. The two tracks work nicely one after the other. On an Azuli Classics compilation a number of years later, DJ John Digweed would mix into Belgium from an INXS track, which sounds terrible but I'm sure worked just fine. Probably.
A more interesting track, in my humble opinion, is the next Full On tune: Frenzy's Don't Stop. I'm pretty sure that echoing saxophone sample is from a Grid track. Have an earful:
The track's actually called Can't Stop and the act seems to be actually called Frendzy, but let's not let a wonky CD listing get in the way of a good tune. This track is deep and hypnotic and everything good about house music in the 1990s.
I can find naff all information about Frendzy, a name which sounds like a failed social network. Production was by Hari, a long-time DJ fixture at Glasgow's Sub Club, and Shug Brankin, who has remixed Apache Indian and, if my googling is correct, once got a load of college kids to make balloon hats.
What can we conclude from these two tracks? One reminds me of Moby and the other reminds me of The Grid. No bad thing.
More Full On faffing to come.

Email ThisBlogThis!Share to TwitterShare to FacebookShare to Pinterest
Read more on: frendzy, full on guide to full on, megatonk, moby, the grid