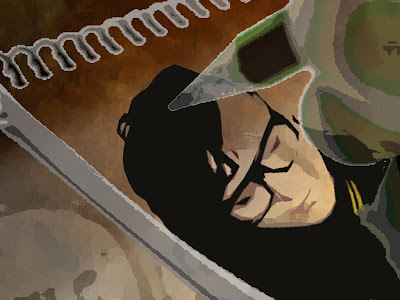 The first ever list was a load of commandments chiselled into stone and carried across the Red Sea by Moses (or something) and now in commemoration of that event, we have a season called yuletide in which everyone makes end-of-year lists.

You may think end-of-year lists just appear, as if it's blatantly obvious that Alt-J are more worthy than Jesse J. But these finely-tuned summaries of arbritary time periods are borne of much chin-stroking, scalp-scratching and cat-squeezing.

I am compiling my usual legendary run-down of electronic albums of 2012, due for publication before the new year. If you too are compiling a list, I can help. Here are my top ten ways to write a top ten music list.

2. Be decisive. Grab your reader with your first choice. Work out what will appear first when people click onto your list, whether counting down or counting up. A list gives you a certain authority. And sound confident by not repeating yourself. Be decisive.

4. Don't miss numbers just to make your list appear shorter. This is like those newsagents that don't give a penny change so they can donate to a jar in their storeroom labelled 'foot spa fund'. It's all a bit of a con and, quite frankly, their feet will always stink no matter what they do.

5. Ensure one of your choices is something you hate but you saw a 400-word gushfest about it in a broadsheet once even though the journalist was probably sexing the bassist in a bath of Ben and Jerry's at the time. Make it your number two choice, thereby showing a sneering nod to the critic fashionistas.

6. Go to the riverside. Take a net. Hide in the bushes until you see a lesser-spotted adjective. Quick, grab it. Scoop up that little blighter. Gather more, add some great-breasted adverbs, lasso a superlative or five. Let your descriptions ring out as they flap and wheeze for air on the page. Then delete them and just compare everything to shoegaze or Skrillex instead.

7. Include a friend's band in the lower reaches of your chart. You go to their gigs to be polite, you know Nick Grimshaw will never play them, and the reason why you bought three of their self-copied album is because of basic maths: one for each dart.

B. Don't feel tied to a numerical system. Count in letters. Count in Greek letters. Count in the Mayan alphabet, which incidentally finishes at 7 at which point newspapers across their country donate all their column inches to pictures of slightly worried dogs beneath stormy skies accompanied by the heading 'ADOGALYPSE'.

9. Include one of your regular favourites whose material has deteriorated so badly over the years that you find yourself at their gigs surrounded only by fatter and more shell-suited versions of you. Include them because failing to do so would invalidate an important part of your identity. Include them in your list. Eat pies. Buy a shell suit.

10. Don't do an end-of-year list. Only an idiot short of imagination and long of time would resort to compressing a year's worth of other people's creativity into a meaningless chart which has neither the exposure nor the financial backing to make it any more relevant than a moth's cough. A worse offence would be to do a list about making the list: that alone is heinous with the emphasis on 'anus'. Anyone who barely even thinks of a number in a blog post, never mind include them should have the following things confiscated: their blogging account, the internet, their hands, ability to formulate thoughts, trousers.

The Fat Roland top ten electronic albums run-down will be published from December 27th. You could cut the tension with a kitten.

PS - joyful Chrimbnas to one and owl.