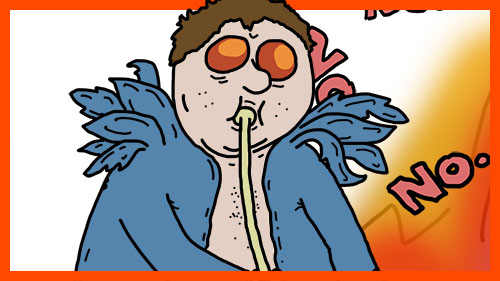 In issue 85 of Electronic Sound magazine, I do a deep dive on the new Bonobo album. Meanwhile, in my column I take on cancel culture while my fictional self blows a horn. All pretty normal, nothing to worry about here.

The Bonobo review is the lead review in this latest edition, which is always a nice spot to be in as a writer. You'll have to read the magazine to find out what I think, but I can tell you it contains the phrase "frozen fish aisle". I also review the latest album by Pan Daijing ("a forest of startled birds") and Arca's new clutch of albums ("witches and queerness").
This month's column has me getting outraged about cancel culture. "Are you telling me I can’t prance around as glam-rock Brian Eno, complete with unbuttoned motorbike jacket and feather shoulder-pads, while hooting Van McCoy's ‘The Hustle’ on the alpine horn?" And yes, that ended up being my illustration for the column, with added conkers for eyes. It'll all make sense if you read the column. Probably. Ahem.
Elsewhere in the mag, in gubbins that wasn't written by me, there's a piece about the Hacienda's design, a chat with Suicide and their "battered old keyboards", Tim Hecker talking about writing soundtracks, and a piece about the ace new electro-pop project Telefis. And loads more.
85 issues, 85 columns. Good grief. Incidentally, Erasure's Oh L'amour only got to number 85 in the charts when it was released, only surpassed by Dollar's cover version in 1987 and Erasure's slightly weedier remix many years later. All the best things are number 85.
Further Fats: Fat Roland's out-of-context March 2018 supercut (2018)