We have shared a journey of thrills and tribulation, my dear reader. But the Theatre Of Noise podcast blog entries podcast blogging podcast marathon is drawing to a sad, pathetic end, despite two historic posts here and here.

The idea was to tell you what it's like to flollop into a proper recording studio and record a podcast in which we destroyed CDs and bantered like silly boys.

Sadly, all this series has achieved is to force three people to puke violently, to make a small child cry in Harrow, and to bring a Welsh pensioner to the painful realisation that she can no longer tell the difference between Bill and Gareth Gates. The trail of destruction is terrible, but I am determined to see this blog series out.

And so for my third and final entry on the Theatre Of Noise podcast, let me introduce you to some of the things we did on air through the power of photograph.

Your starter for ten. Dan The Weatherman reported on the inclement weather from the confines of a brick: 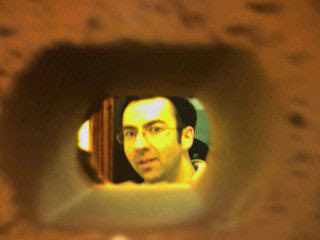 We played a game called Sin Lose Or Draw. Contestants would try and draw a sin (as defined by a fairly right wing Christian website) and their team partner would try and guess what they were scribbling. While people were shouting their guesses, for extra "colour" I would read a list of insults traded between opposing theologians.

This may not sound like an ideal game for radio, like charades on internet forums, but believe me it works like a dream and it will be returning to Refresh FM the week after next.

Anyhoo, here is one of the team's sheets: 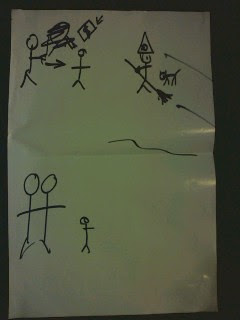 The sins pictured here are (clockwise from top left): thievery, witchcraft and being a conjoined twin. I'm not sure if I've remembered the third one correctly, but the important thing to bear in your filthy little mind is this is the only sheet I could put on this blog. The other sheet had a hand-drawn represention of the sin of fornication, and I will only show it if you really, really, really beg me by leaving a reply on this post.

We also played Chainsaw Challenge, in which a bunch of dim-witted morons vote on which CD is worst and then we destroy it with a power tool. In this case, it was an angle grinder, and the result was: 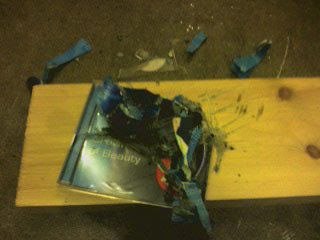 In case you're bothered, it was a Chris Bowater CD.

And so that was the podcast that was. Don't believe me? Have yet another bloody video on the Fat Roland blog (below)! I'm the fat one looking uncool in my black work clothes. I'm next on radio in about nine days, but more about that in two shakes of an elephant's trousers.