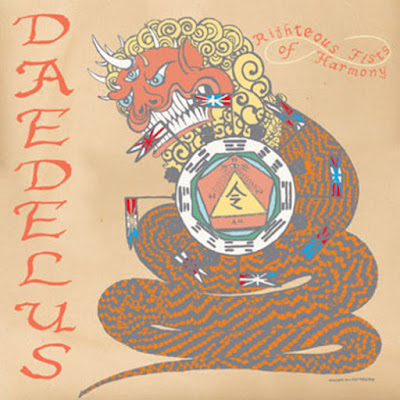 Daedelus
The blurb from the label about Righteous Fists Of Harmony, an important new album from Daedelus, is hogwash, waffling about modernity and the end of an era and containing alliterations that would even make me blanche ("bygone battle", ""contemporary conundrum", "doomed to be destroyed by our ingenious inventions").

Thank goodness the album itself is technically much better. But despite Righteous Fists Of Harmony being the Brainfeeder label's first massive release, the liberal appropriation of disperate styles doesn't work.

On one album (it's a mini-album, really - more of an EP), we have sea-dog folk, Spanish guitar, claustrophobic psychedelia, soundtrack sweetness and pleasing loungecore thanks to the vocals of Laura Darlington, who also appears this year's much more successful Flying Lotus album.

What bugs me though is how dated it sounds when Flying Lotus has appropriated jazz to staggering lengths (note the free drumming on Daedelus' Tidal Waves, then compare it to Cosmogramma) while folk guitar techno has been nailed with stellar success on last year's Bibio album.

Daedelus should strip things down a bit: keep it simple, like the Ninja Tune video for Stampede Me, which does some really lovely things with red, green and blue.


Starkey
Over to the world of crunkstep now, and Starkey's Ear Drums And Black Holes album has more crunch than Timbaland's cornflakes. It's an essential buy for Joker and Rustie fans and is already one of my Planet Mu highlights of the year.

Pick any track on Ear Drums and its more likely than not to sound epic, like it's the 'big single'. So hark ye the loping, grand chords of 11th Hour, the elastic band playfulness of Multidial or the synthesised orchestral fills of OK Luv.

The stark truth of Starkey is he isn't doing anything new, but America needs people like him to keep them oscillating in this strange, ghetto-crunk sub-genre that's genuinely giving a new meaning to the clubber's term "bangin'".