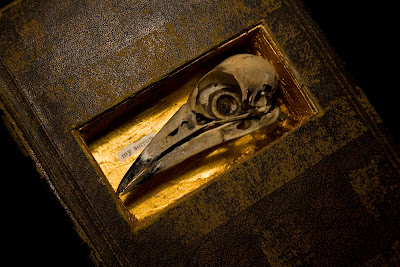 You may know me as an electronic music guru made from silicone, cryogenically frozen Moog synths and deep fried Orbital loops. But I have four more strings to my bow lyre*.

The first string is my umpteenth reading for the Bad Language open mic night at one of Manchester's pubbiest pubs, The Castle on Oldham Street. At past readings, I have imitated Yorkshire men imitating American schoolgirls, talked about the gutting of dead tooth fairies and peeled the text of a story off my reddened chest. What gimmick shall I masquerade as serious literature at the next Bad Language? Come along and see, on Wednesday March 23rd.

And while I'm twanging that first string, you'll also find me performing at the Manchester Twestival at NoHo on March 24th. The Manchester Twestival is a localised version of a much bigger global mission to raise cash for charity through social media. I'll be at what's called a 'pop up literary salon', which sounds like a hairdresser made from cardboard but it is not. If you do buy a ticket, you can raise money for the Wood Street Mission too.

My second string is coming up very shortly, and that's an art exhibition starting tonight. Surgery of Dreams is an otherwise-respectable composer and musician Michael Mayhew scalpelling out the innards of antique books and replacing their guts with found objects, such as shotgun cardtridges, skulls (check the amazing skull on the website) and, gulp, the cast of a vagina. Which I poked with my finger the other day. Gently. The launch is in my bookshop tonight, it will be hosted by me and you should definitely come. The exhibition runs until April 20th.

My third string (hurrah, we have a chord!) is a short story competition I have cobbled together with the original protagonists of the so-called Beatoff Generation. Except now, we are respectable because this is part of the Chorlton Arts Festival. The Flash Mob Writing Competition (see here the Twitter page) is asking for stories of 500 words or less by April 29th, which is otherwise known as That Bloody Royal Wedding Day. All the rules and requirements can be found on our funky red Flash Mob website. This is the Festival's first ever flash fiction competition and all shortlisted entrants will get to read their tales at a special reading and awards night on May 26th with little old me and my chums.

My fourth string has somewhat snapped, only because it naturally sounds of sadness and failure. The F1 Losers League is back once again this year. It's a unique competition which flips the usual fantasy league formula to celebration of the stragglers and also-rans in the world's most high-tech sport. The F1 Losers League will close to entries in the early hours of March 26th, at the beginning of qualifying in Australia. So to take part, you need to get your entry in pretty sharp-ish.

You don't twang bow strings, or make chords with them. Twazmuppet.

Gah! Metaphor disaster. I have changed the first paragraph accordianly-- I mean, accordingly.