The Greenroom must be saved: thoughts from a humble gorilla 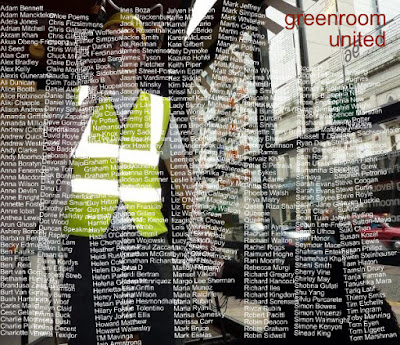 The Arts Council England's decision to cut all of its funding to the Greenroom is the equivalent of grabbing Manchester by its hoody and kneeing it in shakermaker.

The Greenroom, snuggled beneath railway arches near the Cornerhouse cinema, is an unusual mix of theatre space, studio room, cheerful bar and balcony gig zone-type-area. It is unique even in Manchester and it has seen out Thatcher, Madchester, the Hacienda, the IRA bomb, the Commonwealth Games, D:Percussion, Manchester's noughties retail revival, Anthony 'Mr Manchester' Wilson and Frank Sidebottom.

But now, a government intent on an ideological stripping of much that is valuable about Britain has forced the fickle finger of the Arts Council to flick this amazing venue off its books.

I spent many hours in the Greenroom helping build its Greenroom United archive site by interviewing friendly punters and artists of all different shapes and colours, from Graham Massey to Lip Service to Franko B. Editing the audio of those chats late into the evening gave me an awesome sense of history about the place.

I also became part of an exhibition called We Were Spending Precious Time, in which I gave my own walking tour of Manchester. You can see me featured in the first video on the Precious Time site (that's me at the very start).

I played a gorilla at the Cabaret Formerly Known As Bucket, which still rates as one of the greatest performances by any actor, living, dead or future.

The Greenroom is part of me in several ways, then. The Financial Times called the cuts a "surprisingly bloodless affair". My blood is boiling. I'm going to set Frank B on 'em.

The thought that the Greenroom's future may not be so rosy fills me with horror. There is no organisation in Manchester that will take risks with performers on the same scale, with the same support, and with the same acceptance of failure and success as sides of the same coin.

The Greenroom's future must be secured.

Greenroom director Garfield and his staff face some crucial decisions. One thing is certain: the Greenroom has lots of friends it can call on. The picture at the top of this post is my gorilla character being led by cabaret host Gareth Cutter, and overlayed over that is the name of every artist whose story was told on the occasion of the venue's 25th birthday.

There are so many names, you can barely see me emoting gorillaness like the actor that I am.

See the full list of people here. See a larger version of the picture on Twitpic.

Now get onto the Arts Council and complain.

See also: thoughts from The Drunken Chorus; thoughts from Cutteruption. If you have also defended the Greenroom on your blog, let me know in the comments and I'll link it here.

Email ThisBlogThis!Share to TwitterShare to FacebookShare to Pinterest
Read more on: art exhibitionism

Let's start our own green revolution!