Harder Better Faster Fats: a promise of a worthless wordbasher 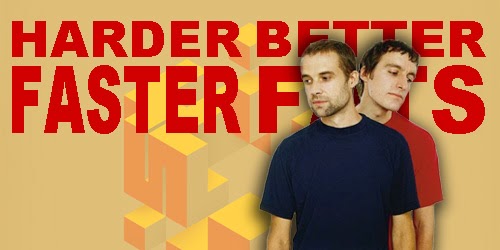 For me, blogging is about nuzzling the stains on my favourite sofa: it's comfortable, it's familiar and it smells vaguely of chicken madras. It's fair to say that the character I represent here is a mixture of the real me and some fictional extreme version of me that sweats Windowlene in a basement.

Before I carry on, get this beautiful piece of electronica down your eartubes. It's a Plaid choooon from a soundtrack from a few years ago.

I've always loved fiction. I love storytelling and strange worlds; the hopes and horrors conjured from authors' minds. I'd always written stories, but it wasn't until the ego-boost of the 2010 Manchester Blog Awards (during which I threatened to nuke one of my rivals) that I took my creative writing seriously.

My arrival on the fiction scene began quietly with a story about tooth fairies for 330 Words, published 11 days after the blog awards and featuring a photo taken at the ceremony.

I followed that with a modest call to arms called The Beatoff Generation: Our Future Books Shall Bleed From Your Shelves Like A Hardback Elixir Reddened From An Embarrassment Of Grammatical Riches.

I've since done 40 gigs in one year, put out a couple of books, been in a thing with Nik Kershaw in, experimented with online narrative and hauled my fat ass around some of the most bearded joints of Manchester.

But like the track above, as time goes on, I'm calming down. I'm focussing. Or at least, that's the theory.

It's my aim in 2014 to produce enough stories for a collection. So that means fewer performances - or at least, fewer open mic slots - and a stinking pile of first draft wordvom each month. I call that a promise. I might even write it down to make it realerer.

Publishers will suggest I write a novel. More routes in. But I'm going to focus on what I enjoy, not because I like faffing around and don't like success, but because I have to what I want to do. It's the one thing to which I'm driven, above my scuba diving, barbershop quartetting and time travelling.

I need this like Justin Biebpipe needs notoriety. Like Prince needs a lawsuit. Like, er, Liam from One Direction needs elbows. I am a worthless word-basher. This year, I will write more and I will read more. Nothing else matters.

There are some obstacles in my way, and they're related to my reason to write. These will be the subject of the next Harder Better Faster Fats.

Yeah. How'd you like them cliffhanger apples? This is literally more exciting than a pop star's bendy-arm-middle.