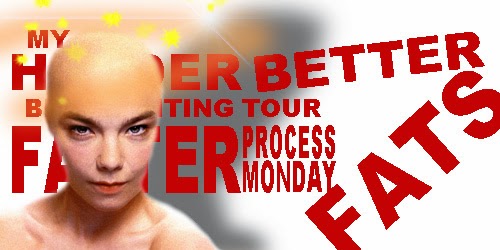 There's a blog tour going around like some kind of Swedish/Danish eco terrorist plague. You can see previous postings of this by Daniel Carpenter, who tagged me, Sarah Jasmon, David Hartley, Iain Moloney, Simon Sylvester, Kathleen Jones and many other writers.

The tour has been called various names, mostly My Writing Process, Blog Tour and Blog Tour Monday. I wanted my contribution to be part of my Harder Better Faster Fats series. So I shall call mine the somewhat catchy My Harder Better Blog Writing Tour Faster Process Monday Fats.

First, as in the rest of this series, let's start with a soundtrack:

WHAT AM I WORKING ON?


“The humans are busy today. They scurry.” Nuke (unpublished)

Everything and/or too much.

I’m the type of person who needs activity. Friends will know me to be a prolific finger-in-pie merchant, careening from studio to stage, from tweeting to designing to doodling.

The one thing I learned about myself in the hurricane of the last ten years is that I have a pathological terror of boredom. And so I create and create and create, sometimes to the detriment of my immediate environment and my health.

Therefore, 2014 will be a strange year. It will be a year in which I aim to take on new commitments; the kind of commitments which are as exciting as anything else I do but will also mean that other people will rely on me.

This means less careening; less cascading from one unrelated thing to another. If the year goes well, I will also have crammed under my belt the best part of short story collection of entirely new work.

HOW DOES MY WORK DIFFER FROM OTHERS IN ITS GENRE?


“A worm tries to burrow into my face. All it finds is cold, irritated human skin, a football field of blotches.” Norway (Peirene Press, 2013)

Let me answer that as honestly as I can.

Unrelenting bullying in primary and secondary school led me to build two robust self-defence mechanisms: food and humour. The former I abuse, and the weight you see hanging off my bones can be considered a form of self-abuse. The latter I express through wit and performance to the delight, mostly, of friends and audiences.

Add to this a sharp sense of tragedy due to the sudden death in my teens of my brilliant and incredible mother, stir once, cover and simmer.

Many writers will baulk at the thought of being lumped into a ‘genre’ and I will do the same. But how does my writing differ? The comic-tragedy and darkness of what I do comes from a place that is real and raging within; when this doesn't come through in my work, I'm either not trying or I have failed.

WHY DO I WRITE WHAT I DO?


“The other day, she crushed a bauble until it burst into powder. The cuts on her palm were invisible and stung like hell.” And This Is My Mother (Merry Gentlemen, 2013)

I grew up on a diet of joke books and Edward Lear, of the Ying Tong Song and the Ning Nang Nong. I’ve also always loved novels and short stories, from literary to comic to horror, and my first memory of secondary school was getting an A+ for a short story about the London Underground.

I’ve never not thought of myself as a writer; indeed, my first proper job was on a newspaper, an experience that solidified some key elements about my approach to writing fiction:

- Life is absurd;
- Life is tragic;
- Stories are infinite;
- You can achieve a lot in very few words;
- Structure in writing is everything;
- I wish I didn't need deadlines, but I do.

HOW DOES MY WRITING PROCESS WORK?


“You look old, he says instead of thinking. You look old and almost dead.” Hoops (unpublished)

I’m writing this at 4am having been awake since an early-evening snooze that left my body clock wilted and useless, Dali-like. So here I am, under my duvet, in my pants, listening to the rain on the window and wondering if I will ever sleep again. I wouldn't call this "process" but it has certainly given me the space to come up with a new short story idea about a fantastical cavity search. Result!

- notebooks;
- backs of envelopes;
- phone notes;
- my laptop;
- my home PC;
- early alarm calls;
- testing stuff out live;
- short walks;
- long walks;
- dreams;
- a constant fear of death;
- too many Bic biros for one man;
- and a dogged restlessness that some may find exhausting. Fingers in pies, fingers in pies.

It boils down to getting down the word-count, but being clear in my vision of what I want to say before my bum hits the seat.

And with this fourth instalment, the Harder Better Faster Fats series comes to an end. Forgive me if I don't tag anyone to continue this particular branch of the blog tour.

Earlier in this post, I mentioned my two self-defence mechanisms. Both could be my downfall. My overeating is a considerable creative block and a continuing struggle, while on a lesser note, humour is an easy refuge from the apocryphal vein-opening gushing that 'truthful' writing is meant to require.

Back in my journalism days, Bjork said in an interview something along the lines of this: she destroys herself at the end of the day, then rebuilds herself all over again.

I love that as a coping mechanism for all the detritus that life splashes at us. Like the refrain of All Is Full Of Love, it's an idea that has circled and circled in glorious repetition over my life for many years.

Wondrous stuff, Fats. I hoped the tour would wend a way to you, and this has been a really special instalment. Thanks.