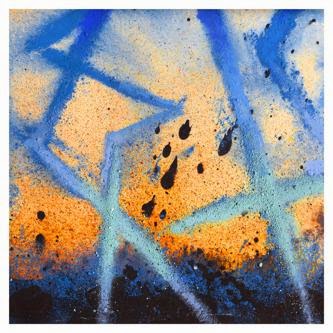 This is probably the only record in the top ten on which the artist’s dad has tooted a clarinet.

Suzi Ecto is Call Super’s debut album, and it’s full of drifting, organic pop-length explorations with real world sounds and real instruments. There is experimentation, for example the chirrups fighting with biting synths on Rosso Dew or the stuttering chimes on Fold Again At Last.

But amid the hisses and the crunches, amid the wooziness, there is more to grab onto than is first apparent. This album left me feeling we’re in a new classic era of ambient techno. Actually super.

A couple of Call Super labelmates didn't make the cut, specifically the heavy production of the songs on Throwing Snow's Mosaic (Houndstooth) and the low-rolling bass notes of Second Storey's Double Divide (Houndstooth). Vessel chopped up bicycles to make Punish, Honey (Tri Angle), but the results weren't as techno as I'd hoped. There was much to like with the precise electronics of Thug Entrancer's Death After Life (Software Recording Co.). Brilliant grimester Wen missed out on the top ten by a millimetre with his excellent Signals (Keysound) - he's probably 11th on the list. Luke Vibert was back with Ridmik (Hypercolour), showing you 303 ways to manipulate a 303. I always expected Plastikman's live album EX (Mute) to be in the top ten, but this expansive and epic LP ended up at about the 15 to 20 mark. And bless him, but Tycho's Awake (Ghostly International), his follow-up to 2011's memorable Dive, was too caught between being accessible post-rock and something you could sing Coldplay to.