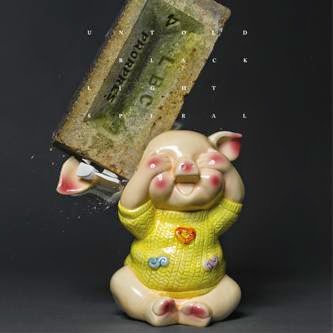 Sonic destroyer Untold prowls the basement of the music scene. Sometimes he pops up to work with the likes of LV, Roska and R&S Records, but he mostly prowls the sewers picking up scraps of dubstep and fashioning them into spiky, confident bass music such as his 2009 work for Hotflush Recordings.

His long-awaited debut album was, therefore, a curveball. Who knew that underneath the sewers were darker, more dangerous paths? On Black Light Spiral, we hear distorted electrocution (Strange Dreams), steamrollered reggae (Sing A Love Song) and Babadookian house horror (Doubles).

There are so many albums that didn't make the top ten. I'll attempt to list most of them.

Untold's other album Echo in the Valley (self-released) was a bit too experimental to be in the top ten. It was released on a USB stick y'know. I enjoyed the spectacularly-named Hieroglyphic Being And The Configurative Or Modular Me Trio's The Seer Of Cosmic Visions (Planet Mu), and part of me was in awe his second moniker I.B.M and the dense Eat My F*ck (Mathematics). More no-fi than lo-fi. Russell Haswell's noisy 37 Minute Work Out was inspired, it seems, by Paul Morley (Diagonal). Vladislav Delay returned to ambient on Visa (Ripatti Label), as did Function & Vatican Shadow on Games Have Rules (Hospital Records), although in a more industrial way. There was more claustrophobic murk on Ital's Endgame (Planet Mu), while labelmate Ekoplekz's Unfidelity (Planet Mu) may have had my favourite track title of the year ("Robert Rental") but its metallic noise didn't entirely click with me. Finally, I disqualified A Winged Victory For The Sullen 's Atomos (Erased Tapes) for being too classical, which is ridiculous because one of the top ten albums to come is definitely more than a little bit classical. Silly Fats.