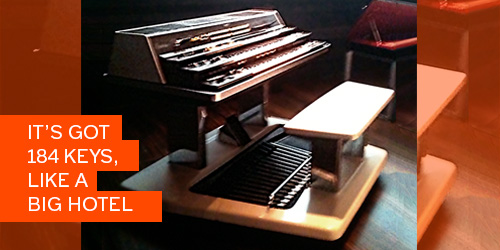 It looks like an organ, but it's an eight-voice polyphonic synth that retailed for tens of thousands of dollars when it came out in the mid-1970s.

It even had a ribbon controller like a proper synthesiser. That's a strip you move your finger on, and it changes what you're playing: like a guitar's tremolo arm or that little eagle eye switch on the back of Action Man's head.

Very few GX-1s were ever made. Stevie Wonder and Aphex Twin own one. Keith Emerson's GX-1 got run over by a tractor - he later bought a second one from Led Zeppelin's John Paul Jones and used its parts to repair his original.


"A truck lost its steering and drove straight into my barn recording studio. It was lucky I wasn’t there at the time, because I would’ve been playing away and the next second I’d have a tractor with a whole trailer of logs behind it go into my back. Somehow my nine-foot Steinway avoided being hit, but the tractor had shoved the GX-1 to the other side of the studio—it was bad news."

Yamaha have also made motorbikes, archery equipment and harmonicas, which suggests to me an exciting new triathlon at the next Olympics.

Further Fats: Confusion in our eyes that says it all - we've lost Control (well, almost) (2008)