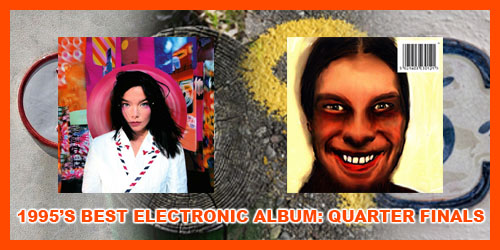 It's time for another quarter final in the competition to find the best electronic music album of 1995. See the series so far here, and see the 16 albums I started off with here. You may well have been in the middle of getting groceries for your grandma, but that doesn't matter right now: dump those shopping bags in the river, take my hand, and let's skip off into the sunset singing "1995! We feel so alive!"
Today, I pair up two more albums that survived the first round. Only one will make it through to the semi-finals as they face my very strict and, er, sensible judging criteria. Today's contest is between:


Post by Bjork
...I Care Because You Do by Aphex Twin

Two solo acts who have carved a singularly individual musical path. Two albums that cemented their respective reputations. Two album covers that have their face staring straight into camera. What are they thinking? How do they feel about this contest? Are they wearing anything below the waist? Let battle commence.
Criteria one: which album feels too big to fit into a caravan?
There's a clear size difference here. Aphex Twin's third album feels insular, as if we're listening to the reverberations of subterranean pipes. In contrast, Bjork's vision feels open and free: rumour has it, she sung one of these songs to the sea and another one inside a Bahamian cave. Okay, caves are quite insular, but the whole landscape of Post feels bigger. Therefore, for obvious reasons, you ain't getting that album inside that dang caravan no matter how much your Uncle Malcolm brags about his spatial awareness.
Winner: Post

Criteria two: which album has the best individual noise?
Both albums are full of great noises. There's a particularly aggressive fart about four minutes into Aphex Twin's The Waxen Pith, and although the ear-piercing feedback on Ventolin is difficult to take, his rusty snare on Start As You Mean To Go On is a real treat. Bjork's album is an aural rollercoaster, and I especially love the plaintive squeals in the beatless first half of Hyperballad. The problem is, no matter how much Bjork tries, the annoying shushing on It's Oh So Quiet undoes all of her noisy efforts.
Winner: ...I Care Because You Do
Criteria three: which album makes your record collection look coolest?

Both albums make your record collection look cool, especially among all your Nolan Sisters twelve-inches and Keane picture discs. Do those things even exist? Aphex Twin has to win this one, because you can dig out this album at a party and sellotape it to your face to make your friends laugh. "Oh look, you're being Aphex Twin!" they all chortle as they swig the Blue WKD laced with bleach. "Oh look, Aphex Twin has poisoned us!" they gasp as your evil Aphex face smiles back coldly.
Winner: ...I Care Because You Do
Criteria four: which album would you play to ward off a tiger?
The tarnished techno rhythms of ...I Care Because You Do are enough to scare off any big cat. Leopards are particularly wary of MIDI-enabled synthesisers. Meanwhile, Post saw Bjork embracing a bigger sound, giving her only top ten hits of her career. She even became a whole army ("If you complain once more, you'll meet an army of me"). She may have teamed up with Graham Massey and Tricky (see Tricky's quarter final here), but Army of Bjork needs no help: that poor tiger is history.
Winner: Post
Criteria five: which album has the sexiest track titles?

Excuse me while I don my polka dot negligee so I can judge this section properly. Bjork's track titles are proper phwoar. You've Been Flirting Again. Cover Me. I Miss You. Enjoy. I bet Aphex Twin is the sexiest, though. Let's have a look at his track titles. Oh. Er. Wax The Nip. That's about it for sexiness, and I'm not sure nipple waxing is sexy. We're talking the actual nipple rather than any hair growth around it, right? It's going to chafe. I feel very un-phwoar. I'm changing back into my boiler suit.
Winner: Post
Criteria six: Which album would sound best played on the panpipes?
I'm sorry, I mistook the question. I thought you said bagpipes. I've been blowing into the business end of this sheep for no reason (I couldn't find actual bagpipes). The farmer's going to be furious, especially after last week with the cow and the homemade trebuchet. Look, I haven't got time to judge this criteria properly. I'm pretty sure you could mix some panpipes into Aphex's twisted analogue tapestries, so let's call it a win for him. Today I learned that sheep don't go "toot". Who knew?!
Winner: ...I Care Because You Do
Criteria seven: miscellaneous and worryingly random

This final section is subject to Wikipedia's random page function. Here goes. Which album will kill you? Bjork, especially if you're a photographer (special topical joke, I thank you). Which album would win at the 1948 Summer Olympics? Aphex Twin because his body is (acrid avid jam) shredded. Which album is the most Russian? Aphex has a Siberian coldness, and his track titles certainly look Google-translated from Russian. Which album is best for women's empowerment? Bit of an open goal, this one: it's Bjork. Which album is a luminous red giant? We're back to the landscape thing again: I bet Bjork recorded some of her album on a distant star.
Winner: Post

Overall winner and going through to the quarter-finals: This was the toughest decision of the competition so far: I've so much love for both of these albums. The Aphex album is endlessly playable, but Post saw the creation of a global pop celebrity and the eradication of tigers from most beaches and caves. Bjork scrapes the win and moves to the semi finals.

There's one more quarter final in this best-of-1995. Be there, or I'll wax your nip. See all the original riders and runners here.