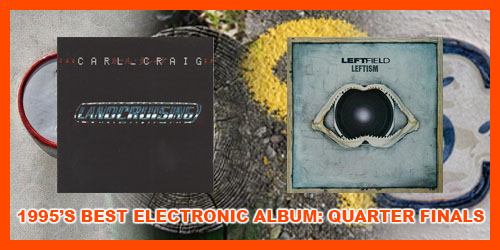 What is the best electronic music album of 1995 (see the series so far here)? You no doubt have an opinion, especially if you check out the 16 albums that started this competition off. But opinions are like holiday homes on the Costa Daurada: everyone's got one. The only opinion that matters in this ongoing competition is mine. And if that sounds egotistical, then, er, sorry about that. Yeesh. I'm a real douche.
This is the last quarter final before we move into the semi finals. The stakes are high. Today's bout is between:

Carl Craig and Leftfield both began their careers in 1989, and both went on to shape electronic music. A sped-up spin of Craig's Bug In The Bassbin supposedly lay the groundwork for drum 'n' bass, while the 'field are credited as starting the genre of progressive house. It will be a shame to lose either of them. Brace yourself.
Criteria one: which album feels too big to fit into a caravan?
Carl Craig pays tribute to his motor city hometown, evoking sunny drives with the window wound down. Following that logic, it would be pretty difficult to fit a road inside a caravan. On the other hand, Leftfield's space shanties evoke an entire universe of texture and colour. Their sound system was so incendiary, it once stripped the plaster off the roof of a venue. Fitting Landcruising into a caravan might be like trying to fit a camel through the eye of a needle, but getting Leftism into that glorified shed would be like shoving a whole flipping solar system into the atoms of the needle itself.
Winner: Leftism
Criteria two: which album has the best individual noise?
Carl Craig's got some great vroom vroom car sounds. I would have preferred choo choo sounds, but sometimes you've just got to take what you're given. Leftfield have barely any transport sounds: not even a tractor. That said, they've got tonnes of strange and wonderful noises: bleepy radar bits on Original; funny bubbly bits on Melt; an electronic wobble board bit on Release The Pressure; and a bit where a guy goes waaaah like he's doing a mad skateboard trick which I suppose technically is a form of transport.
Winner: Leftism
Criteria three: which album makes your record collection look coolest?

I remember Leftism coming out so clearly. It was beautiful chunk of vinyl, and looked superb on my coffee table next to my nose flute. "Look at this lovely album," I would tell visitors. "Is that a nose flute?" they would enquire. "Stop looking at the nose flute," I would scream. I didn't get many visitors. Leftfield are cool, but Landcruising looks way cooler. It's dark and mysterious, and the clash of the car emblem and the dot matrix text only raises questions. You'd not keep it on a coffee table: maybe that's why it's cooler.
Winner: Landcrusing
Criteria four: which album would you play to ward off a tiger?
A walkover for Leftfield. They've got John Lydon on their side, threatening to open things up and burn Hollywood to the ground. He's the original Tiger King. If Johnny Rotten was cornered by a snarling tiger, he'd smear it in butter, which tigers famously hate. Carl Craig not only fails to repel tigers, he's a positive tiger magnet. Want proof? He's from Detroit and their baseball team is called the Detroit Tigers: that's how bad he is at warding them off. Useless.
Winner: Leftiism
Criteria five: which album has the sexiest track titles?

Carl Craig's track titles are a bit dry. Home Entertainment, Technology, Mind Of A Machine. I'd imagine a date with this album would result in an early night: me getting into bed on my own while Landcruising fixes the VHS player. Leftism fares a little better: the track titles Open Up, Melt and Release The Pressure could all be mistaken for b-sides to Madonna's Justify My Love. Even then, I'm not terribly excited, even if the Leftfield title Inspection (Check One) is a euphemism lifted straight out of a Carry On film. Oo-er missus.
Winner: Leftism
Criteria six: Which album would sound best played on the panpipes?
The staccato synth stabs of They Were rolled off my panpipes like lemmings off a cliff, and the wandering lackadaisical melody of One Day Soon floated seamlessly into the air like, er, lemmings floating up a cliff. A good result for Carl Craig. And while the opening siren call of Leftfield's Melt was easy to follow, the panpipes sounded naff against their speaker-rattling production. A win for the lemmings, Er, I mean... a win for Carl Craig. Just to clarify, Carl Craig is not a lemming. If anything, he looks like a handsome baby seal.
Winner: Leftism
Criteria seven: miscellaneous and worryingly random

Because I'm reckless and want to watch the world burn, this final criteria is generated using Wikipedia's random page function. Which album could scale an Austrian mountain range? Carl Craig because he's land cruising. Which album has fourfold rotational symmetry? Leftism thought their album didn't quite hang together at first, so Carl Craig must be more symmetrical. Which album would win a TV talent show? Leftfield because John Lydon would show off to the judges. Which of the two albums would make the best Mongolian poet? Leftfield's 21st Century Poem may ignore thousands of years of pre-2000 Mongolian history, but at least they have a poem. Which album would make the best Christmas tree to create a home for the cartoon chipmunks Chip n' Dale? Carl Craig and I'm not explaining why.
Winner: Landcruising

Overall winner and going through to the quarter-finals: A landsliding win for Leftfield, as they scoop five of the seven sets of judging criteria. Looks like they're the one to beat as they move to next week's semi final. In 2005, Carl Craig released a reedited version of Landcruising called The Album Formerly Known As..., updating some of the sounds, Maybe he was anticipating this very competition. Too little too late, Carl. Too little, too late.

Next week, I launch the semi finals of this stupid contest to find the best electronic music album of 1995. Stay tuned. See all the original riders and runners here.