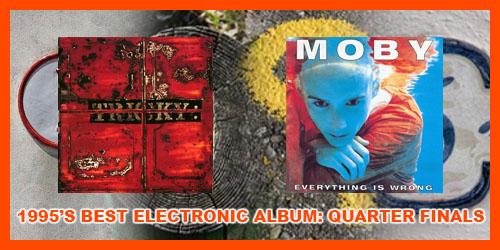 Put down that egg sandwich and pay attention. It's time for the second quarter final in my contest to find the best electronic music album of 1995. No, you may not put it in the fridge. The only thing that matters is this music battle in which I, Fat Roland, play judge, jury and executioner.
There are only a handful of contenders left. I won't spoil the results so far: you can see the whole series here and see the introduction to the quarter finals here. This second quarter final is between:

Maxinquaye by Tricky
Everything Is Wrong by Moby

That's a cracking contest. The difference couldn't be greater: a muttering misery guts versus a happy clappy techno idiot. Fire versus ice. Oil versus water. Cillit versus Bang. There hasn't been a binary choice like this since, er, sorry, I can't think of any controversial votes that have happened in recent years. Here goes. A place in the semi finals beckons...
Criteria one: which album feels too big to fit into a caravan?
Assuming we're talking about a single-axle caravan of no more than six metres nose to tail, the route for entry is usually through a single doorway of no more than 57 centimetres across and 170 centimetres in height. The insular nature of Tricky's sound, forever sounding like an imploding bong trip, guarantees easy entry: it's music made for hunched shoulders. Meanwhile, there's no way Moby's ever getting through that door, not with all that glorious hands-in-the-air star-jumping rave exuberance.
Winner: Everything Is Wrong

Criteria two: which album has the best individual noise?
In audio terms, these albums are poles apart. Moby's noise is based on charming artificiality, with its use of vocal samples and preset-style fake strings. I rather liked the moody "lets" at the start of Moby's Let's Go Free, but for the most interesting sounds, we must turn to Tricky. Slurred lyrics, stoned whispers, scuffed snares, awkwardly tripping loops and, best of all, the depressed, descending tooty sound woven through Suffocated Love. What a treat.
Winner: Maxinquaye
Criteria three: which album makes your record collection look coolest?

Eamonn Holmes is flicking through your records. "Woah, dude," he says, with Moby's blue face staring gormlessly up at him. He continues rifling through your albums. "Like, woooah, dude," he says, looking at the distressed red tones of Tricky's album. You want to ask him which album cover was the coolest, but now he's just sitting on your record player drooling at a crack on the wall. You suspect he thought Tricky was coolest. It's hard to tell these days with Eamonn.
Winner: Maxinquaye
Criteria four: which album would you play to ward off a tiger?
The trick is to look at the tiger's face. It flinches as I play the thrash metal bits of Everything Is Wrong, but there's something of a Tigger-energy to Moby's pre-Play career, and I can't help feeling that, despite its initial surprise, the tiger's emotionally connecting somehow. On the other hand, it finds Maxinquaye disorienting; there are too many layers, tonal changes and confusing human voices. Look at its left eye twitch. That tiger's not happy.
Winner: Maxinquaye
Criteria five: which album has the sexiest track titles?

With tracks called Overcome and Black Steel, Tricky's album sounds like a sequel to 50 Shades Of Grey; as sexy as a Tory party conference. The sexiness of Moby's titles is much more direct: All That I Need Is To Be Loved, Everytime You Touch Me, Bring Back My Happiness. Lights off, clothes off, rattle the bedposts, showered in time for mackerel for tea. And God Moving Over The Face Of The Waters sounds like a classic next-day-in-the-office sexual conquest boast.
Winner: Everything Is Wrong
Criteria six: Which album would sound best played on the panpipes?
Maxinquaye is a jumble of pitch-shifted sounds and glitches; it defies any normal logic. Everything Is Wrong is the polar opposite: the songs run from A to B, using well-recognised songwriting tropes. If I let Tricky anywhere near my panpipes, he'd probably turn them into a bassoon or an ashtray or a farmstead on the Isle of Jura. Things would be much more straightforward with Moby. A tune is a tune. Panpipes means panpipes.
Winner: Everything Is Wrong
Criteria seven: miscellaneous and worryingly random

This final section is generated using Wikipedia's random page button. Which of the two albums could cause an earthquake? Moby, because he's got God on his side. Which album is most likely to be eaten by moths? Tricky: it sounds pretty bitten already. Which album floats best? Moby, because he's moving over the face of the waters. Which album is the most Senegalese? Tricky's Bristol is slightly closer to Senegal than Moby's Harlem, so Tricky gets this one. Which album is best for soundtracking Asterix comics? Tricky sounds thoroughly dosed in Getafix's potions.
Winner: Maxinquaye

Overall winner and going through to the quarter-finals: Tricky trundles through to the semi finals. The Moby album is a personal favourite of mine, but Tricky's album is one of the most acclaimed debut albums of all time: it deserves the win. Isn't that right, Eamonn? Hey, Eamonn. He's not listening – He's climbed into the fireplace again. Silly Eamonn.

Stay tuned to this website for another chapter in the saga that is Fat Roland Decides What The Best Electronic Music Album Is Of 1995 While Sellotaping Custard Creams To His Face To Ease The Boredom Of Lockdown. See the introduction to the quarter finals here. See all the original riders and runners here.

Email ThisBlogThis!Share to TwitterShare to FacebookShare to Pinterest
Read more on: best albums of 1995, moby, tricky