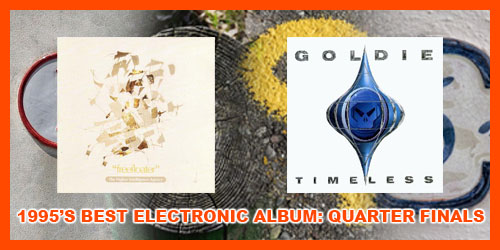 A horse and a nun walk into a bar. The horse says, "Have you seen Fat Roland's competition for the best electronic music album of 1995?" The nun says, "Why the long face?" The horse says, "You do this every time, Alison, why do you never listen to me?" Ignore those two idiots: they're hogging the queue to the bar. My best-of-1995 battle is back on track. Strap in, music fans.
We started with 16 albums and now it's time for the first quarter final. See the series so far here, and see the introduction to the quarter finals here. The choice is between:

The Higher Intelligence Agency (HIA) beat the legendary Sabres Of Paradise to get this far, while Goldie knocked out The Chemical Brothers. Two giant-killers, and only one will survive through to the semi finals. We have brand new judging criteria, and special thanks must go to @benjaminjudge, @JacksonWylde and @viaduct_theatre for suggesting criteria two, four and six respectively. Slap on that vaseline, it's time to fight.
Criteria one: which album feels too big to fit into a caravan?
The squiggly IDM of Higher Intelligence Agency, with its filters squeezed into ever-narrowing frequency bands, would be small enough to fit into a matchbox, never mind a caravan. Stick it under the Calor Gas, sorted. On the other hand, Goldie's Timeless is all about bombast, dynamism and volume. The opening track is 21-minutes wide: you'd not even get that into the entrance of the campsite. There's no travelling light with the monster that is Timeless.
Winner: Timeless

Criteria two: which album has the best individual noise?
Goldie's sound defined an era of drum 'n' bass, and so his album has some ear-bending moments. At one end are the heavenly suspended strings pulling everything taut, while at the other end there's some really ugly crying on Tears. The best single sound are the vocals crescendoing in at the start of State Of Mind as if catapulted from a distant satellite. Higher Intelligence Agency's work is full of great noises, with their squawks and boings and tickly acid (just listen to Elapse), but nothing beats Goldie.
Winner: Timeless
Criteria three: which album makes your record collection look coolest?

I have a real issue with how Timeless looks. I know embedding a Metalheadz logo in a perspex vagina was the coolest thing ever in 1995, but it hasn't aged well. Whereas, if I was flicking through your records and happened across Freefloater, I'd be intrigued. The cover looks like an impressionist Blue Peter ship, and the speech marks around the track title give it an added irony. Yeah. Pretty cool if you ask me.
Winner: Freefloater
Criteria four: which album would you play to ward off a tiger?
Let me think this one through. I turn down the side of Lidl and there's a striped, snarling beastie blocking my cut-through to the chiropodist. How do I fight the tiger? I could batter its face with HIA's bloopy beats, but that would only annoy it, and I don't want to run because I haven't got to the chiropodist yet. Goldie's beats might skip along more breezily, but they're much heavier. A fat snare drum right in its snout should do it. Take THAT, tiger.
Winner: Timeless
Criteria five: which album has the sexiest track titles?

With titles like State Of Mind and Jah the Seventh Seal, Goldie's track listing brings to mind the tantric liaisons of sexy Sting. Then again, he might start singing, so let's see how sexy the HIA track titles are. Fleagle. Hubble. Ting. Skank. Hmmmm. Less high class escort agency, more a fleshy fumble in a fag-stained Travelodge. Tough decision. The HIA album has "floater" in its title, which is the unsexiest thing ever. Sting, you've pulled.
Winner: Timeless
Criteria six: Which album would sound best played on the panpipes?
Complete disaster. I was halfway through the squealing sirens of Goldie's nasty Saint Angel and I dropped my panpipes down the toilet. The bleepy melodies of HIA, especially on Ting, were much easier to handle, despite my pipe-holes being a little damp. I'd wipe them down with bog roll, but, y'know, rationing and all that. I really must find a room in my gaff with better acoustics.
Winner: Freefloater
Criteria seven: miscellaneous and worryingly random

As with the first round, this final judging criteria is guided by Wikipedia's random page function. Which album flies highest? HIA is literally "Higher": it's in the title, duh. Which album makes the best Christmas music? Easy: there's a jolly festivity to HIA while Goldie's more Good Friday, alas. Which album could be prime minister of India? Goldie's led an orchestra, so surely he could do that as well. Which album helps with the scientific study of insects? HIA is the only one I can imagine beetles dancing to. Which album is secretly a Norwegian footballer? I guess This Is A Bad describes Norway's FIFA World Cup results, so Goldie it is.
Winner: Freefloater

Overall winner and going through to the quarter-finals: No penalty shoot-out here: Goldie goes through to the semi-finals, winning four of the seven criteria. He will face whoever wins the second quarter final. Sad to see you go, Higher Intelligence Agency. The Metalheadz master proved too steely in the end.

Stay tuned for another quarter final as we get ever closer to discovering [cue dramatic look to camera] the best electronic music album of 1995. See the introduction to the quarter finals here. See all the original riders and runners here.

Very pleased to have paid some small part in Goldie's victory.

Timeless always reminds me of my youth. Specifically, the many nights I spent in a pub in Cannock that had the album on a three-songs-for-a-pound jukebox and many customers who liked a bargain when they saw one. 21 minutes for 33 pence? Have a go on that, I reckon. It played at least once an hour. Of course these were more innocent times and I was doing the lindy hop at the time etc etc etc