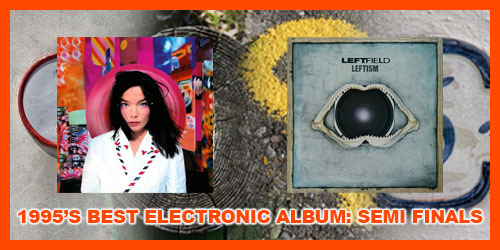 It's the second semi-final in the ongoing contest to decide the best electronic music album of 1995. I'm too excited to look. Someone blindfold me. Poke out my eyes with spoons. Sellotape me into a box and mail me to Peru. It's all too tense to bear.
The winner of this bout will go through to the grand final to meet yesterday's winner. We will then know the best 1995 album and there shall be no more debate. See the series so far here, and see the 16 albums I began with here.
As with the last semi-final, I am judging these albums with some slightly unconventional criteria. Hoping to win my semi-thumbs-up in this most semi-gladiatorial of battles is:

The hyper-balladeer meets the space shantiers. Jeeves, can you please lube up the contestants and place them into the firing cannon of destiny. One shall win. One shall be spurned forever. The semi-final is go.
Criteria one: which album is best stored in a fridge?
The crystalline atmosphere of Post seems ideal for cold storage, which is a good job because Leftfield lose this on two counts. Firstly, they've got a song called Melt which, let me remind you, is extremely triggering for fridge systems. And they've got some buttery punk loudmouth singing "burn, Hollywood, burn". Only Bjork can deliver safe storage for my dairy goodness.
Winner: Post

Criteria two: which album is the best soundtrack for the lockdown?
The violently happy Bjork would be an ideal companion for being stuck at home. You can both just sit there, "listening to the irritating noises of dinosaurs and people dabbling outside." That would have been the best choice, if it weren't for the futurist defiance of Leftism. "I've got to stand and fight," they say. "Will it ever be the same again?" they ask. The bold sounds of Leftfield are what we needed to narrate a lockdown.
Winner: Leftism
Criteria three: which album would make the best birthday present for an elephant?
I'm not sure the zoos are open as I write this, so I had to make do with throwing CDs at a horse. The rider was furious, and I waffled something about people in Cheltenham breaking distancing rules, which didn't help. But then I played Bjork's It's Oh So Quiet and the shushing really helped calm the rider down. The horse kicked me in the face, but that's beside the point. I'm sure it could please an elephant.
Winner: Post
Criteria four: which album's track titles are a secret code to unlock the secrets of the Illuminati?
To be honest with you, I wasn't really thinking when I included this judging criteria. I'm not into any of that illuminati nonsense, and I don't think Prince William looks much like a lizard. Leftfield have the chanting lyrics of Afro Left and the dubby spaciness of Storm 3000, while Bjork's track title Army Of Me sounds like a the name of a one-man illuminati conspiracy blog. She wins on the track title technicality. But truly, I'm out of my depth here. If we really are run by a cabal of space blobs, I'd be the last one to notice.
Winner: Post
Criteria five: which album can you dance the Macarena to?
The only song acceptable for dancing the Macarena to is the song Macarena. However, if you are going to flout Macarena rules, then you should probably bust your moves to Leftism. Nothing against Post: the carnival vibes of I Miss You are perfect for repetitive choreography. It's just that Leftfield's beats hit harder and for longer: we're talking an extended, dark, after-hours Macarena. A sexy Macarena.
Winner: Leftism
Criteria six: Which album cover would make the best face tattoo for Fat Roland?
I've always wanted to improve my face: I look like a spud that's been dumped in a river bed. If I had the Bjork album tattooed on my face, then I'd look as good as Bjork, which is very good indeed. If I had the Leftfield album inked on my face, I'd look like some kind of jaw-eyed cyclops. "I'm a space blob," I'd say as people ran screaming. Horses would throw CDs at me. This sounds amazing: Leftfield's all-seeing eye wins.
Winner: Leftism
Criteria seven: miscellaneous and worryingly random
In the worst decision since, er, most decisions in the UK for the past ten years, this section is curated using the random page button on Wikipedia. Here goes. Which album looks brownest? Leftfield, despite Bjork being dressed as an envelope. Which album needs a good wash? Bjork because she sings about standing by the ocean. Which album is a reptile? Despite Leftfield's illuminati leanings, it has to be Bjork for the only reason that Isobel is a great name for a turtle. Which album should have been covered by Jerry Garcia? Jerry lived just long enough to see the release of both featured albums – he would have chosen Bjork. Which album should be played in Liw Castle in Poland? Playing Leftfield in a flipping castle? No brainer. Which album could soundtrack a 1930 German thriller? The sheer drama and intensity of Leftfield would be ideal for this. Which album would be the subject of a satirical story by The Onion? For her headline-grabbing antics and "oh so quiet" dramatics, Bjork.
Winner: Post
Overall winner and going through to the grand final: The gap between the contestants was so narrow, you couldn't have fit Bjork dressed as an envelope between them. The winner is Post by Bjork: her amazing Nellee Hooper-produced album elbows its way into the final. I'm gutted to lose Leftfield: they lost the Mercury Music Prize, and now they lost this.

16 albums began this contest (see the original 16 here) and only two remain. The best electronic music album of 1995 is about to be decided. Don't go turning that blog dial: there's an epic final battle coming our way.

Email ThisBlogThis!Share to TwitterShare to FacebookShare to Pinterest
Read more on: best albums of 1995, bjork, leftfield