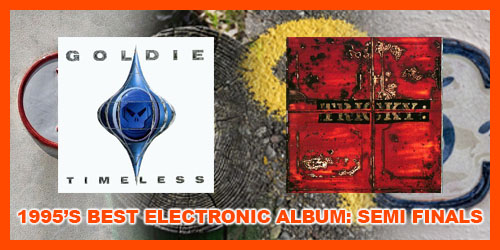 In a thousand years from now, when the apocalyptic nuclear dust settles, the few remaining mutated humans will whisper in hushed tones: "do you remember when Fat Roland did his Best Albums of 1995 thing?" And then some more of the remaining mutated humans will reply with their elbows, "Who?"
It's time for the semi-final of my competition to crown the best electronic music album of 1995. If you're not up to date with this, see the series so far here, and see the 16 albums I started off with here. The winner of today's face-off wins a place in the grand final.
I've refreshed the judging criteria and, as ever, there is only one person on the judging panel: me. Facing my wrath for this semi-final is:

Timeless by Goldie
Maxinquaye by Tricky

The Walsall metalhead meets the Bristolian wild buncher. Let's fire up this sausage and see if it bursts.
Criteria one: which album is best stored in a fridge?
I feel that if I left Maxinquaye within a mile of my fridge, my butter would be mouldy within minutes. Tricky's got a serious case of cross-contamination in those filthy beats. In contrast, I'd happily nestle Timeless against my yoghurts and tripe. It's a clean album and works best at cool temperatures. I'm not having Goldie in my freezer, though: he'd swipe my Ben & Jerry's. Ice cream's the only thing he can eat, what with those gold teeth.
Winner: Timeless

Criteria two: which album is the best soundtrack for the lockdown?
Both albums trade on a certain level of paranoia, with Goldie's inner city pressure and Tricky's cack load of drugs. Neither can relieve the lockdown but they certainly could reflect it. It's the Tricky album that best sums up the cataclysm that is the Covid crisis in lyrics like "hell is round the corner where I shelter" and "how can I be sure in a world that's constantly changing?" and "how do I hide my own view in Zoom?"
Winner: Maxinquaye
Tricky · Hell Is Round the Corner
Criteria three: which album would make the best birthday present for an elephant?
This one is easy. Maxinquaye is custom-made for wrinkly elephants as they trample across muddy plains. Their flat feet drum in trip hop patterns. Listen to them trumpet, the pure fat sound of a– oh hold on, someone's at the door. Back in a mo. ... Ah, sorry, that was Elmer the Elephant and he says Timeless is, and I quote, "da bomb when I'm toking on a patchwork blunt." This one has to go to Goldie. Don't blame me; blame the fictional elephant who coincidentally turned up at my door just now.
Winner: Timeless

Criteria four: which album's track titles are a secret code to unlock the secrets of the Illuminati?
Glad you asked. To detect illuminati coding, we're looking for three things in the titles: lizards, triangles and anything that rhymes with 'David Icke'. Tricky's Abbaon Fat Tracks has four letter As: are these triangles? Would lizards live in Goldie's Sea of Tears, or am I thinking of turtles? I had another listen to Tricky's disturbed whispering throughout his album, and he's definitely unlocking some Dan Brown kinda shizzle right there. He's like a whispering Icke.
Winner: Maxinquaye
Goldie (Official) · Sea of Tears

Criteria five: which album can you dance the Macarena to?
For those living in the future, I'm writing this in times of social distancing, so I'm unable to carry out a controlled Macarena experiment on the 143 bus through Withington. However, Goldie's tricksy tripping rhythms are ideal for Los del Río's popular Spanish dance. I can picture it now: ardent arm thrusts, bombastic belly wiggles, underpants flying everywhere, the harrangued bus driver trying to catch me with an oversize fishing net. A mí me gusta!
Winner: Timeless

Criteria six: Which album cover would make the best face tattoo for Fat Roland?
Not having had a tattoo, I'm never quite sure: do you have to draw in the white bits? Thing is, the Goldie album already has a face on, so it should be ideal, but it would end up as a tiny face on the end of my nose and everyone would get confused. I'm often huffed and puffed and red in the cheeks, so if you tatted Maxinquaye across my fizzog, hardly anybody would notice – I'm going for that one.
Winner: Maxinquaye

Overall winner and going through to the grand final: After a nail-clenching buttock-biting semi-final, Tricky storms it at the end to win a place in the grand final. The album stormed end-of-year polls after its release, so it's very worthy. Alas, for Goldie, the time ran out. Time. Timeless. Time ran out. Geddit?! No. Dammit.

The second semi-final will hit the internet faster than a speeding patchwork elephant. Watch this space. In the meantime, see all the original riders and runners here.

Email ThisBlogThis!Share to TwitterShare to FacebookShare to Pinterest
Read more on: best albums of 1995, goldie, tricky