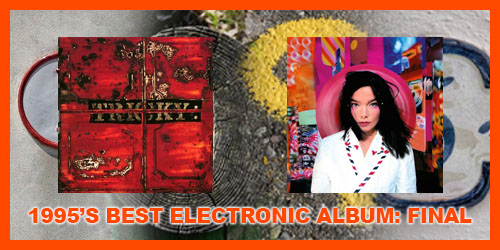 I hope you've been following the battle to find the best electronic music album of 1995. It has, frankly, taken ages: this grand final has been a long time coming.

We started this contest with 16 albums by the greatest names in bleepy beats, including Aphex Twin, the Chemical Brothers, Leftfield and Autechre. Bout by bout, an album has been eliminated, often for incredibly spurious reasons. Why spurious? Because (a) the judging criteria has included egg songs, elephant birthday presents and the size of caravans, and (b) the only judge has been me, and I'm often sozzled on the contents of my cleaning cupboard. Who knew Toilet Duck tasted of bubble gum?

Disclaimer: Toilet Duck does not taste of bubble gum. Do not drink cleaning products. I am building a sophisticated comedy character through exaggerated fictional activities, so you should ignore that comment. As you should, for that matter, everything I ever write.

For the grand final, I'm going to use a random number generator to arbitrarily select some previously-used judging criteria. This is in the sincere hope that the eggs one will come up again: I miss that one. Fingers crossed.

Let's welcome our contestants for the grand final. They are:

The New York Times declared Maxinquaye as the "first album-length masterpiece" of trip hop. Spin magazine praised the way Post broke the "flow of whiny rockers", while another publication said it set the scene for the incoming cyber age. Two massively important albums. Only one can win.

Criteria one: which album feels too big to fit into a caravan?

Nice to see the caravan criteria back, last seen in the quarter-finals. The sheer scope of Post would overwhelm a humble caravan door, thereby impeding entry. And if you told Bjork to get into a caravan, she'd slap you across the schnozzle. But the more I read about Tricky's chaotic recording sessions, the more cluttered Maxinquaye sounds. Fitting his album into a space that small would be like trying to squeeze all your furniture into next door's bird nest. Don't let Tricky anywhere near my caravan: at the very least, he's going to snap a hinge.
Winner: Maxinquaye

I feel quite sad about face tattoos. Post Malone's "always tired" tattoo makes him look, well, always tired. A face tattoo on my podgy boatrace would make me look like a confused balloon or a sofa infested by spiders. Despite my previous fondness for Tricky's red, I really should go for Bjork. I'd look great. I'd look like Bjork. The actual Bjork. "Mummy, why has that man got a Bjork CD drawn on his face?" "Ignore the strange man, Jemima, he's one of those bloggers." Yeah. It would be brilliant.
Winner: Post

Criteria three: which of the two would Jesus listen to?

Neither contestant fared well in this judging criteria back in round one, with me finding BT and Autechre more Christ-friendly than Tricky or Bjork. So which of these two heathen long-players deserves the attention of the saviour of the world? Maxinquaye feels more like John the Baptist, prophesying the future in Hell Is Round The Corner. With her evocations of nature and mystery, perhaps Post is more druidic than I'd given it credit for. It's easy to see which one Jesus would plump for.
Winner: Maxinquaye


Criteria four: which album is best stored in a fridge?

In the semi-finals, I was unconvinced about putting Tricky's album in the fridge. There was too much contaminated filth in his dirty beats. And although there's something delicate about Bjork's music, like ice crystals, Post was Bjork in a boisterous mood: "I won't sympathise anymore," she warns. Should someone that feisty be stored near eggs? I'm beginning to think it's Tricky we should keep in the fridge, at least to stop his smoky beats from going off.
Winner: Maxinquaye

Cast your mind back to May 2007. The charts were full of Nelly Furtado and Shakira. On the 1st of that month, I published this blog post declaring that Bjork had released a "choon". It was poorly written and didn't really explain what the tune in question was, but it pointed towards Bjork's propensity for bold melodic motifs, clearly evident on Post. Have I ever written a blog post about Tricky releasing a "choon"? No, I haven't. Sorry, Tricky.
Winner: Post

Criteria six: which album has the sexiest track titles?

I unfairly compared Maxinquaye to 50 Shades Of Grey in the quarter-finals, while I referred to Bjork's track listing as "proper phwoar". And while Tricky's Overcome and Suffocated Love suggest a certain level of bedroom tomfoolery, I really can't deny the sexiness of Bjork's cheeky Enjoy and You've Been Flirting Again. "This is sex without touching," she says. She's talking about her track titles. I bet her record company was very confused.
Winner: Post

Criteria seven: an honest appraisal of both albums
I would usually cram this final judging criteria (criterium?) with a bunch of random gubbins from Wikipedia. But as a respectful sign-off to this blog series, I thought it would be nice to give some serious consideration to these grand finalists. The 1990s would have felt different if either work had been absent. Tricky consolidated the blunted electronics of the Portishead aesthetic, although you could argue that trip hop in general has not aged well. Bjork made herself a star with her album, which was show-tuned and filmic, although you could argue her most acclaimed work lay elsewhere. Only one of these albums, however, burned like a magnesium fire; a moment of production madness that summed up the hybrid nature of 1995's music scene like nothing else. And no, it's not easy to sing along about eggs to...
...Winner: Maxinquaye


The best electronic music album of 1995 is: Maxinquaye by Tricky. I reckon six of the 16 albums featured in this contest were serious considerations for first place, but it's former Massive Attacker and trip hop pioneer Adrian 'Tricky' Thaws that takes the title. A thoroughly worthy winner for a genre-crunching, beat-breaking, lyric-smudging work of paranoid perfection. "Don't wanna be on top of your list," says Martina Topley-Bird on Tricky's Overcome. Sorry, Martina. Best of 1995 it is.

Email ThisBlogThis!Share to TwitterShare to FacebookShare to Pinterest
Read more on: best albums of 1995, bjork, tricky