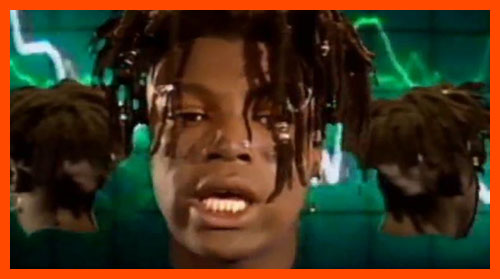 In May 1990, Adamski's Killer knocked Madonna's Vogue off the top spot of the UK singles chart. Madge was too concerned with Greta Garbo and Rita Hayworth, and didn't see the keyboard wizard sneaking up from behind.
Killer wasn't just a breath of fresh air: it was a fully-bellowed gust up the jacksie. It was clearly informed by Adamski's rave DJing, but that bass drum / bassline combo was something new. The Italo-house piano, the 909, the bit where Seal's voice goes "be-ee-e-ee". So good.
The track was recorded amid noisy protests over the Tories' anti-rave legislation. Seal was a penniless singer, while Adamski was relying on the government's Enterprise Allowance Scheme (as was I around that time). Lots of dance music felt politically charged. Killer seemed to suck in all that energy, then blast it out in a fully clubby and commercial way.
Watch the original verson with decapitated Seals, young Adamski wearing a skinned llama, and. um. some random science lab tech things.
The track was a huge smash. Only four artists outsold Adamski that year: the Righteous Brothers, Sinéad O'Connor, Elton John and king of all rappers Vanilla Ice. The single hit number one in Zimbabwe and Belgium and — wait for it — hit number 112 in Australia.
George Michael's bland version brought the track back to UK number one in 1993. I was horrified. It sounded like yer dad discovering your rave records and putting on a live entertainment night with a buffet. Still, I was obsessed with Killer and bought every subsequent cover / remix on vinyl. Even the George Michael one. Sigh.
Here's Seal and Adamski appearing on Top of the Pops on Christmas Day 1990. No jeans and a t-shirt with these two. Just look at them. Adamski looks like a little peroxide tearaway and Seal looks like a gymnast biker. Both are in full live flow, with Adamski taking bits of his other tracks and throwing it all into the mix. Brilliant.
Further Fats: Finding healthy pop wheat amid the pop forest fire of, um, doom (2014)
Further Fats: The 7 best moments in Ryan Wyer's video for Aphex Twin's CIRKLON3 [ Колхозная mix ] (2016)