Much love from Four Tet - but an icy silence from Monolake 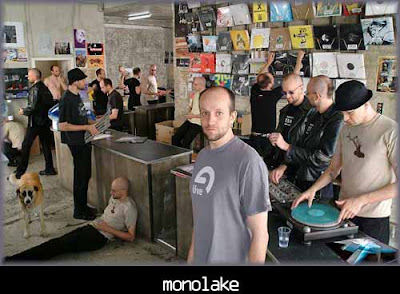 Kieran 'Four Tet' Hebden ambled down some strange improvisational avenues for a while, but he's back on the main road behind the wheel of his perfectly programmed bus to bring us his first album for ages.

There Is Love In You will hit at the end of this month. It follows his massive tune Moth with Burial and the spinning, rolling nine-minute epic single Love Cry, a track which waited nearly six minutes to drop a driving techno bassline that would make Fluke puke with joy.

There is precious little audio rattling about the internet but judging by Love Cry and another album track, Much Love To The Plastic People, we should expect sharp, driving electronica that has that trademark Four Tet subtlety.

If you're not mad on Four Tet, you could do better than get the album for your budgie.

That's not the only album worth stroking your speakers with this month. The other day, I posted some snow-themed electronica; it doesn't get much icier than Monolake's recent LP Silence (Monolake pictured).

With track titles like Avalanche and Infinite Snow, here's an album that will replace your spine with an icicle and stick your tootsies into a bucket of liquid hydrogen. The droning desolation (eg the screaming Shutdown) and barren voices (Null Pointer's autobot narrator) are saved from being utterly disconnected because of the warm, organic real-world samples.

Listen to Four Tet's Love Cry on Stereogum.  Listen to some Monolake Silence tracks on Boomkat.

Like the Four Tet - although I prefer the Joy Orbison remix - it slunk it to my head and I've found myself humming it...

I think Joy Orbison is very much "where's it at" in 2010. I can see myself buying a lot of his stuff this year.