Gonja Sufi's a smokin' nomad in sound and soul: plus Friends Of Friends and Babe Rainbow 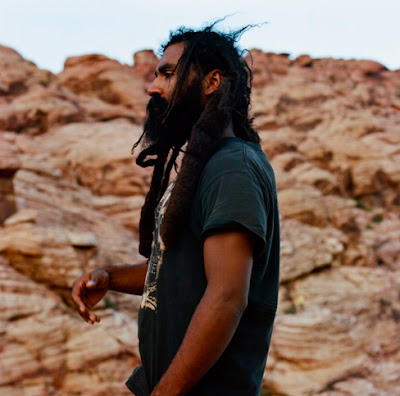 Gonja Sufi
Time for some single reviews. The haunting voice of Gonja Sufi will leave an indelible mark on 2010, especially with his second 7" single Kowboys And Indians. He's so unique, a nomad in sound and soul, that he hardly needs the production genius of eclectic LA beatcruncher The Gaslamp Killer. But it works like nothing you've heard before.

The track opens with a buzzing that will have you packing your speakers off to the repair shop. What follows is a stunning blend of eastern mysticism, slacker guitar, psychedelic rhythm and a vocal that swings loosely between Bollywood theme music and Method Man aged 95.

Gonja Sufi, that sinister, genre-smoking spirit of an electronic Hendrix, has produced the essential new sound of this year. The rats are already fleeing town in preparation of his all-conquering debut album A Sufi And A Killer (featured in the March section of my 2010 electronica preview).


Daedelus
Where do I start with the first volume of a split-single series from the Friends Of Friends label? They've given Ninja Tune's Daedelus and debuting double-act Jogger three tracks each on the Friends Of Friends Vol 1 EP, but then they've gone and drowned it all with no less than seven remixes. Flippin' heck!

Daedelus slaps down some disco house (C'est Super works nicely), then gets the guitars out and strums to a Smashing Pumpkins sample. Jogger concentrates on pumping house (Litre O' Colais is especially manly, grrr) and then goes and spoils it all with vague electric guitar noodling, demonic growling and speed techno silliness.

On the remix side, Prefuse 73 protégée Eliot Lipp puts Kraftwerk through an 80s disco mincer, while for his remix of Nice Tights, Nosaj Thing does a wonderful job creating a leftfield soundtrack full of guitar whimsy and minor-key boogie. A mixed affair - it could have been prettier without all the remix bling, as they'd no doubt say on Stockport's Next Top Model.


Babe Rainbow
I promised I would waffle about Babe Rainbow when the time came for his long-awaited Warp debut, the Shaved EP. It's time, so let's get the clippers out and inspect the scalp of Canada's premier dubstepper.

Sorry. I mentioned the d-word. The thing is, Cameron 'Babe Rainbow' Reed is kinda dubstep, but only in a slow-motion, life-slowly-melting-before-your-eyes way. His noise is so deep and deliberate, he makes Massive Attack look like Scooter (the hardcore German funsters, not the weedy muppet).

And so we have seven tracks of metallic, ringing percussion with vocals swamped with claustrophobic drizzle and an all-too-familiar whoomp bass. With the exception of sixth EP track Celebrate, I'm yet to fall in love with Babe Rainbow. Then again, I haven't used his music to get so stoned out of my face, my brain is melting on a toxic beach somewhere north of Jupiter.