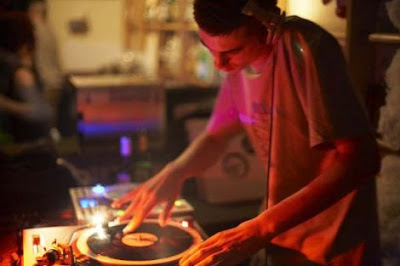 Before I get stuck into February proper, please allow me to catch up with a few musical missives that I intended to waffle about last month but didn't get round to because I was too busy sniffing baby wipes.


Jóhann Jóhannsson
This is from a while ago, but I wanted to mention it because I saw him live last year. Swathes of swooshing strings is the order of the day for Jóhann Jóhannsson's album And In The Endless Pause There Came The Sound Of Bees.

Jóhann, who has a name that never seems to finish like Banarama, produces classical music with shavings of electronica and can often be seen playing to bleep-heads. His ostentatiously titled album is in turns delicate and flamboyant, but I can't be doing with the morning-has-broken cheery stuff and would much rather he stick to the murky ambience or the eerie foreboding of his most filmic tracks.

A couple of tracks now. The cold refrain on Skream's remix of Instra:mental's No Future ("lies confusion government control") is nothing short of pants-droppingly brilliant. It's a lolloping half-stepper that stomps its metal legs until you're marching to the same, automatic beat. It threatens to fall into the wobble bass cliche so beloved of dubstep, but it remains purely minimalist.

Speaking of minimalism, Minimalistix is the name of the track on the b-side of the Skream remix. The paddy drums (as in drums that sound like soft pads: it's not me being racist) fight against airy soundclaps as the cut builds and builds and builds.

It reminds me a little of the strange alien isolation of Higher Intelligence Agency and despite its stubborn simplicity, I could play it repeatedly and not get bored: Skream's remix is definitely something to Munch on. (See what I did there?)


Simian Mobile Disco
Beth Ditto, her with the big gob, struck gold when she recorded Good Intentions with Simian Mobile Disco last year. You may want to know there are a couple of remixes doing the rounds, but to be honest former Hacienda resident Greg Wilson's retro stylings have far too much bongo (yes, you can have too much bongo), while Maurice Fulton's disco-tastic take on the track is the kind of generic funk groove that has me sulking in the corner of the club waiting for the good tunes to come on.