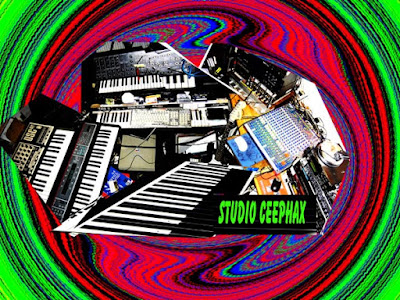 Hey, look, there is some albums what just come out!

I'm swinging from the bloody lightshade.

United Acid Emirates, the new album from Ceephax Acid Crew, has got me prancing around my mansion like a brain damaged pixie. It's so lurid and colourful, like being stuck in an 8 bit Meg And Mog cartoon.

The drooling, looping trippiness of the acid, splattered all over this album, is a constant, giddy joy. The opener Cedric's Sonnet is a sharp, spikey melodic number reminiscent of his brother Squarepusher in Welcome To Europe mode. Castilian is dragged kicking and screaming by a full-on, bullying bass drum, while the dated click rhythm of Life Funk reminds me of Felix-era house music.

This is, however, not a stupid album. It's a serious step forward for Ceephax, where he demonstrates his various skills at chugging 80s techno anthems (Topaz) or off-kilter chord arrangements (Commuter). And all this with plenty of squelching acid moistness. Highly recommended.


Massive Attack
Are you bothered about a new Massive Attack album?  Of course you are: I can't believe you asked me that, you idiot.

Heligoland has finally, um, landed. It's a full seven years after the band's previous studio album ("If a thing's worth doing, it's worth doing slowly," says their MySpace page) and nearly 20 years after their highly influential debut Blue Lines. And actually, it's that memory of Blue Lines that I can hear on Heligoland.

Yes, there are guest vocalists (which The Guardian had down as almost unique in the dance world, despite the Gorillaz, Fatboy Slim and Unkle doing that kind of thing for years). Yes, there is gloominess a-plenty. But what this has, which I think 100th Window missed, is... capital letters... SOUL.

It's an album that is destined for coffee tables, new year's parties and easy headlines about the vocal collaborators (hello, Guy Garvey), and therefore many serious music fans will brush it off their shrugged shoulders. Which is a shame.

What will really get me all excited are those Burial remixes the internet's been promising.


Pantha Du Prince
Also out this month is Pantha Du Prince's Black Noise. Oh, and look, he has vocal collaborations from the likes of Animal Collective, !!! and LCD Soundsystem people. Read this and weep, The Guardian.

Black Noise is awash with clouds. You know how some albums sound urban-y and some sound outdoors-y? This is Heidi the goat-herder's friend flatlining on heroin on the highest mountain in the world while buzzards perform a jagged dance of death around her.

With sharp techno, dizzying loops, spiralling bells and smoky, smoky atmospherics, this will appeal to Susumu Yokota fans looking to grab something a bit more substantial by the goat horns.